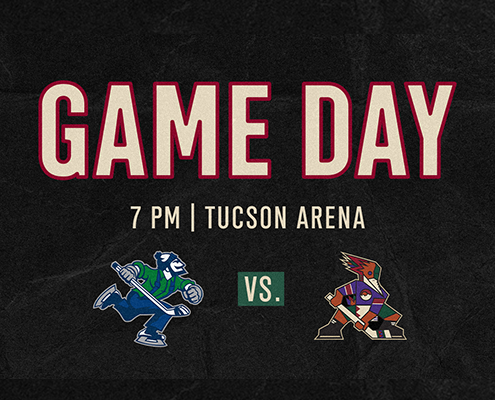 The Tucson Roadrunners will host the Abbotsford Canucks for a pair of games this weekend at the Tucson Arena. The Roadrunners are taking on the Canucks for the first time in franchise history and will look to start the all-time series off with a win Friday night. The Canucks are currently 4-4-2-1, with a +1 goal differential, and enter the series having last played November 14 against San Jose, a 3-2 shootout loss.

Three Things
1) The Roadrunners are coming off a 2-1 road win against the Iowa Wild, handing them their first regulation loss at home of the season. All three goals were scored in the first period, with Matias Maccelli and Terry Broadhurst finding the back of the net for the Roadrunners. Tucson held the Wild to just six shots on goal in the third period to lock down the Sunday afternoon win. The Roadrunners drew five penalties to Iowa’s three, and goaltender Zane McIntyre made his Roadrunners debut, stopping 31 saves and earning the win.

3) This weekend at the Tucson Arena will feature a variety of festivities, beginning with a giveaway Friday night. The first 1,000 fans to arrive will receive a Roadrunners cowbell to help cheer on Tucson as they host the Abbotsford Canucks for the first time ever. In addition, the Roadrunners will be wearing their fan-favorite Kachina jerseys all weekend. To welcome the only Canadian team in the AHL Pacific Division to the Old Pueblo, the Tucson Arena will be serving Arizona-style poutine at select concession stands.

What’s The Word?
Tucson Roadrunners Defenseman Ty Emberson on playing tough and sticking up for his teammates this season:

“We’re a tough team, that’s the mentality we have. We’re a brotherhood, so we go out there and defend each other like we’re brothers.”

Number to Know
21.9 – The average age of the Roadrunners defensive unit entering the weekend with Abbotsford. Tucson’s blue-line possesses a unique blend of youth and experience, with four of the seven having played professionally overseas, and the remaining three each played three years of NCAA hockey before joining the Roadrunners.