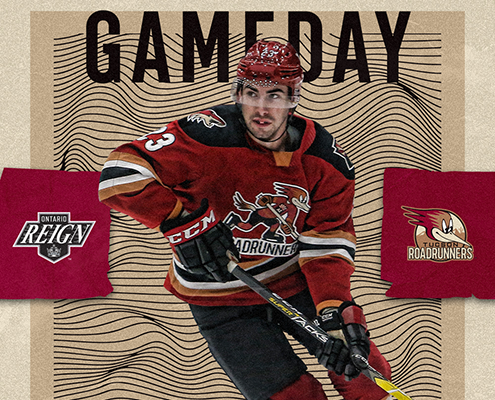 The Tucson Roadrunners return to Southern Arizona for their first of four games in a span of six days beginning Tuesday, March 16, when they take on the Ontario Reign. Tucson is 2-1 against the Reign this season, with all three games having taken place at the Toyota Sports Performance Center in El Segundo, California.

Three Things
1) Tucson has played three games against the Reign so far this season, with all three taking place at the Toyota Sports Performance Center in Los Angeles County. Scoring is even at 12 goals scored for each team. The Roadrunners were 7-1 against the Reign last season and a perfect 4-0 when taking them on at the Tucson Arena.

2) Goaltender David Tendeck from the Arizona Coyotes ECHL affiliate Rapid City Rush has been called up to the Tucson Roadrunners roster. Tendeck spent the past five seasons with the Vancouver Giants of the WHL, and was drafted in 2018 by the Arizona Coyotes, alongside fellow Roadrunners netminder Ivan Prosvetov.

3) Tuesday’s game marks the first game of the season where spectators are allowed in the Tucson Arena. It also marks the beginning of Fan Week, a celebration of spectators returning to the Tucson Arena for games, with festivities planned for each game day. As for Tuesday, fans are invited to wear Roadrunners gear all day, as they go to work and school, navigate around town or spend the day at home; and to tag the team on Facebook and Twitter for the chance to win Roadrunners Prizes. Additionally, Roadrunners Happy Hour will air live from the arena starting at 5 p.m. and lead fans to face-off on Fox Sports 1450 AM and the iHeart Radio app.

“I think everyone pulled the same way [Saturday], we all came together and ultimately when you have twenty guys going in the right direction good things happen. I thought we stuck to our game plan for sixty minutes and we got a good outcome.”

Number to Know
11 – The new number of Tucson Roadrunners skaters with a multi-point performance through twelve games this season. Nate Sucese and Ryan McGregor became the third and fourth to join the list in the last three games, with multiple points in Saturday night’s win in Irvine over the San Diego Gulls. Kevin Hancock and Doyle Somerby accomplished the feat in the Roadrunners two previous games.

We’re Doing It Live
Roadrunners Hockey returns to the radio today at 6:30 p.m. as “Voice of the Roadrunners” Adrian Denny brings you all of the action on Fox Sports 1450 AM. All Roadrunners games are broadcast live on Tucson’s Sports Station, along with AHLtv