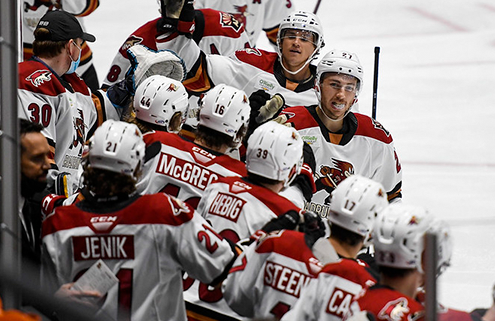 Where We Stand
The Tucson Roadrunners are currently 6-6-0-0, tied for fourth in win percentage in the AHL Pacific Division. They play four games in six nights this week, taking on the Ontario Reign and San Diego Gulls each twice at the TCC. Tucson has the second-best penalty-kill in the division, after going a perfect 10-for-10 in two games this past weekend.

Who’s on the Schedule
The Roadrunners will be back home for the next four games, taking on familiar faces in the Ontario Reign and San Diego Gulls for two games apiece. Tucson is 2-1 when facing the Reign this season and 1-0 over the Gulls after their 4-1 victory Saturday night in Irvine. Tucson has not faced either of these teams at home this season.

For the Fans
This week marks Fan Week, a celebration of spectators returning to the Tucson Arena for games. There are festivities planned for each game day, including limited single-game tickets still available to purchase at HERE.

We’re on TV
Saturday’s matchup with the San Diego Gulls at 5:00pm will be seen live on The CW Tucson as the Roadrunners will introduce the entire team and hockey staff during player introductions, and also unveil their 2019-2020 Pacific Division Championship banner just prior to face-off.

Tendeck on Deck
Goaltender David Tendeck has been assigned to the Roadrunners by the Arizona Coyotes. In 13 games with Rapid City this season, Tendeck has recorded a .913 save percentage, and will slot into the current goaltender rotation with Connor LaCouvee and Chris Nell.

Did You Know?
The Tucson Roadrunners have now had three straight games with a player recording a multiple-point performance for the first time this season. Kevin Hancock did so with a two-goal outing March 6 versus Texas, Doyle Somerby recorded a goal and an assist 23 seconds apart March 12 against Ontario, and Nate Sucese and Ryan McGregor each accomplished the feat in a win over San Diego on March 13.

Play Along With Us At Home
Roadrunners Play, an interactive fan experience, launched last weekend during the home series with Texas. Fans can play along at Roadrunnersplay.com and make their predictions for a chance to win one of several Roadrunners-themed prizes.

Around the Pacific Division
This week will see all seven AHL Pacific Division teams in action, starting with five of the seven Tuesday night. The San Jose Barracuda have a pair of games with the red-hot Bakersfield Condors, before heading out on the road to face Henderson this weekend. Meanwhile, Colorado has a pair of games with Texas, and Ontario and San Diego travel to Southern Arizona to take on your Tucson Roadrunners.