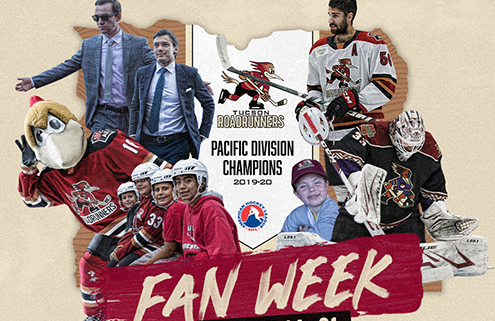 Tucson, Arizona – The Tucson Roadrunners, owned and operated by the Arizona Coyotes, have announced the festivities for Fan Week, which will run through this week’s home stand at Tucson Arena as the organization celebrates the return of spectators to their games.

A limited number of tickets to all four games during Fan Week are available now at TucsonRoadrunners.com/WelcomeBack. All seats are social distanced and will come with special information on entry and exiting Tucson Arena along with all health and safety details.

Tuesday
Ontario at Tucson, 6:30 p.m.
Fans are invited to wear Roadrunners gear all day, as they go to work and school, navigate around town or spend the day at home; and to tag the team on Facebook and Twitter for the chance to win Roadrunners Prizes.

Roadrunners Happy Hour will air live from the arena starting at 5 p.m. and lead fans to face-off on Fox Sports 1450 AM and the iHeart Radio app.

Wednesday
Ontario at Tucson, 6:30 p.m.
The Roadrunners will personalize images of Kachina Jerseys for fans in a special Wallpaper Wednesday with details on the team’s website and on social media Wednesday morning.

The team will also share on social media coverage of the Roadrunners walking their traditional red carpet on the way into Tucson Arena prior to face-off. Fans are encouraged to be following the team on Facebook, Twitter, Instagram and YouTube to see all of the action.

Saturday
San Diego at Tucson, 5 p.m.
The game will be seen live on The CW Tucson as the Roadrunners will introduce the entire team during player introductions and also unveil their 2019-2020 Pacific Division Championship banner just prior to face-off.

Sunday
San Diego at Tucson, 5 p.m.
Roadrunners Play from Casino Del Sol, the team’s new interactive in-game experience and predictive gaming platform, will have prizes from the Roadrunners and Casino Del Sol for 50 random winners who participate for the game.

The team kicks off Fan Week by auctioning off the game worn Kachina jersey that Coyotes goaltender Adin Hill wore during his conditioning assignment last Saturday. Hill is the Roadrunners all-time wins leader, has appeared with the team during each of its first five seasons in Southern Arizona and has also played with the Arizona Coyotes each of the past four seasons as well. All proceeds from the jersey will benefit Roadrunners Give Back, a branch of the Arizona Coyotes Foundation. The jersey is available to bid on now at TucsonRoadrunners.com/DASH.

The Roadrunners, with their official merchandise provider Just Sports, will hold a special each day during Fan Week starting on Monday where fans will get a free Roadrunners Rally Towel with a $20 purchase at Shop.TucsonRoadrunners.com.

The team’s mascot Dusty will be on the North Side of Tucson Monday after hitting downtown and the campus area on Friday afternoon in his special Fan Week Pregame.

Tucson Roadrunners’ Road Ahead: Week of March 15
Scroll to top