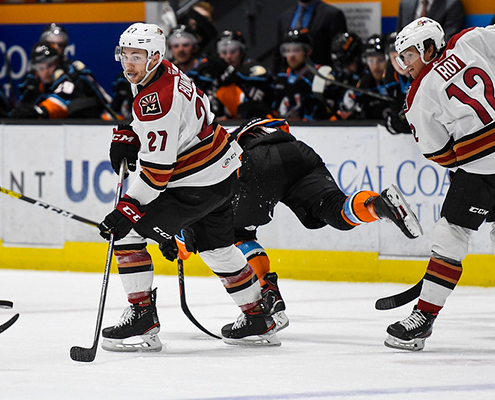 Irvine, California – There was never a doubt in the Tucson Roadrunners 4-1 victory Saturday night against the San Diego Gulls in Irvine, California as Tucson returns home on a high note to host fans on Tuesday.

The Roadrunners dominated the game early on Saturday night, getting the first nine shots on goal, along with the opening goal of the contest by Jeremy Gregoire, his first tally of the season. San Diego answered back with a goal of their own nearly ten minutes later. By the end of the first period, the score stood at 1-1, but Tucson had outshot San Diego 12-4. Less than five minutes into the second period, Michael Bunting picked up his fifth goal of the season to give the Roadrunners a 2-1 lead. The goal was sandwiched between two excellent penalty-kills by the Roadrunners. Tensions were high throughout the second period, as Jan Jenik and Jeremy Gregoire exchanged blows with members of the Gulls less than 21 seconds apart. Gregoire had a rematch with Gulls skater Trevor Carrick later in the period. A late power-play goal by Lane Pederson sent the Roadrunners to the locker room up 3-1 heading into the final period of action. An insurance goal by Nate Sucese midway through the third put the game away for the Roadrunners, giving them a 4-1 victory. Connor LaCouvee picked up his first win as a member of the Roadrunners, stopping all but one of the seventeen shots on goal that he faced.

The Roadrunners return home for Fan Week, a stretch of four games in six days, beginning Tuesday night at 6:30pm MST versus the Ontario Reign. You can listen to the game in Tucson on FOX Sports 1450 AM and on the iHeart Radio app or watch the game on AHL TV.

“The leadership and each player’s commitment to the game plan was executed to their highest degree. Each player on the team played selfless minutes and they gave themselves fully to the team tonight. It was nice to see.”

Tucson Roadrunners head coach Steve Potvin after the game on Tucson’s performance up and down the lineup in Saturday night’s win over San Diego.

DON’T OVERLOOK IT
MULTI-POINT MASTERY – Tucson Roadrunners rookie forward Nate Sucese became the tenth Roadrunner this season in only 12 games to record a multi-point game Saturday night versus San Diego. Saturday marked the third game in a row where a Tucson player notched multiple points for their first time of the season, after Kevin Hancock and Doyle Somerby achieved the feat in Tucson’s previous two games.

Watch as Roadrunners forward Jeremy Gregoire buries the puck in the back of the net for his first goal of the season. His goal came roughly six minutes into the first period and opened the scoring for the Roadrunners Saturday night versus San Diego.

Tucson Roadrunners linemates Nate Sucese and Ryan McGregor celebrate after Sucese lit the lamp in the third period Saturday night against San Diego. Sucese, a rookie from Penn State University, has five points in his first twelve professional games as a member of the Tucson Roadrunners.