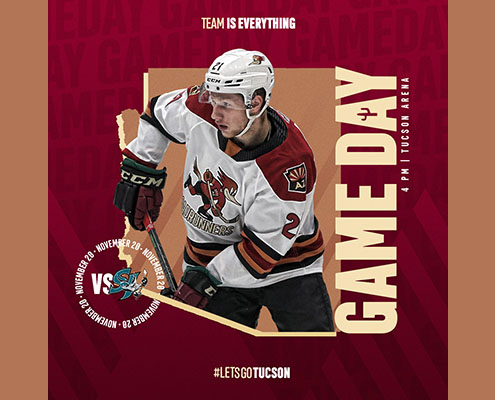 The 8-4-1-0 Tucson Roadrunners close out their six-game home stand at the Tucson Arena Sunday afternoon, as they’ll host the San Jose Barracuda for the second matchup of a two-game weekend series. The Roadrunners took the series opener by a score of 6-3 after facing a 3-0 deficit in the first period. Tucson will look to remain undefeated against the Barracuda, as they enter Sunday with a 3-0-0-0 record against the AHL affiliate of the San Jose Sharks on the season. Sunday is Community Giving Day at the Tucson Arena, with the Roadrunners collecting non-perishable items, frozen turkeys and gift cards to help provide local families with Thanksgiving Dinner. In addition, Rudy’s Texas B-B-Q’s Family Packs with four tickets, four hats, and a $25 gift card to Rudy’s Texas B-B-Q are available at TucsonRoadrunners.com/Fun.

Three Things
1) The Roadrunners overcame an early 3-0 deficit in Saturday’s series opener with San Jose, as they netted the final six goals of the contest to come away with a 6-3 win. The victory represented Tucson’s largest come-from-behind win of the season and matched their season-high for goals in a game, which they set a game prior against the Henderson Silver Knights on Wednesday. Three of the six goals for Tucson were scored by first-year forward Milos Kelemen for his first hat trick and second-straight multi-point performance. Kelemen joined Laurent Dauphin (October 23, 2022) as the two Roadrunners with a hat trick on the season.

2) Tucson’s 6-3 win over the San Jose Barracuda Saturday night marked the second-straight outing where the Roadrunners scored a season-high six goals. After 12 Tucson skaters tallied a point in Wednesday’s 6-2 win over the Henderson Silver Knights, 11 Roadrunners recorded at least a point in Saturday’s series opener with San Jose. After the pair of high-scoring victories, seven players enter Sunday’s series finale on point streaks of at least two games, while J.S. Dea and Ben McCartney have notched a point in each of their last three efforts.

3) The Roadrunners have outscored the Barracuda 15 to seven through three meetings this season. Forwards Milos Kelemen (four), Mike Carcone (three), Nathan Smith (two) and Adam Cracknell (two) all have multiple goals against San Jose this season. Carcone also leads the Roadrunners in total points against the Barracuda this season with eight (3g 5a). Tucson goaltenders Ivan Prosvetov and Jon Gillies have combined for a save percentage of .931 and a 2.27 GAA in three outings against San Jose, as both have recorded season-highs of 38 saves in back-to-back games with the Barracuda. In addition, Gillies was a perfect three-for-three in a shootout in San Jose on October 29 and kept the Barracuda from scoring in the final 43:45 of Saturday’s series opener.

“Good teams learn how to find momentum at the right time. It’s really important that we had the game here [Saturday] and we have to follow it up [Sunday].”

Tucson Head Coach Steve Potvin on the importance of Saturday’s win over the Barracuda in the series opener. The 6-3 victory represented the Roadrunners second-straight win with six goals scored by Tucson in each contest.

Number to Know
10 – The number of trips to the power-play for Tucson in Saturday’s series opener with the San Jose Barracuda. Three of the six total goals scored by the Roadrunners were scored while on the man-advantage, which is tied for a season high by Tucson. The Roadrunners previously scored three power-play goals in their Home Opener on October 22 against Bakersfield, all in the second period.

We’re Doing It Live
Today’s game will be broadcast on AHLtv, as well as on the radio on FOX Sports 1450AM and the iHeartRadio app. Coverage will begin at 3:45 p.m. with Roadrunners Warm-Up hosted by Jimmy Peebles, before “Voice of the Roadrunners” Adrian Denny has all the action from the Tucson Arena.

RRTV In The Community: Our Magical Mural
Scroll to top