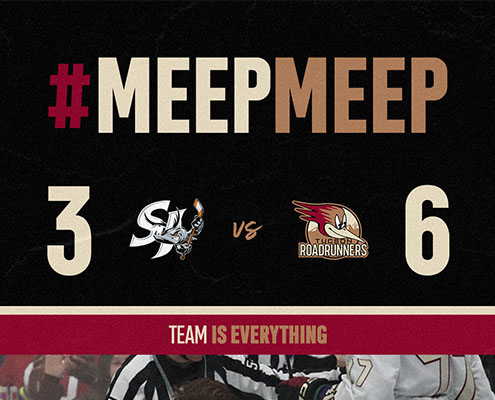 Tucson, Arizona – The Tucson Roadrunners opened a two-game weekend series with the San Jose Barracuda Saturday night at the Tucson Arena, as they overcame a 3-0 deficit to earn a 6-3 win. Forward Milos Kelemen recorded the second hat trick by a Roadrunner this season, joining Laurent Dauphin (October 23 vs Bakersfield). Forwards J.S. Dea (2a), Mike Carcone (1g 2a) and Nathan Smith (1g 1a) also tallied multiple points. Roadrunners netminder Jon Gillies earned his second win in as many outings this season against the Barracuda with 19 saves.

Roadrunners forward Milos Kelemen scored the second Roadrunners hat trick of the season Saturday night in a 6-3 win over the San Jose Barracuda. The first-year forward from Slovakia now has six goals on the season, with four coming against the Barracuda.

PLENTY OF POWER-PLAYS – The Roadrunners shattered their season high for power-play opportunities in a game Saturday night, as they took a total of ten trips to the man-advantage against the San Jose Barracuda. Each of Tucson’s first three goals of the contest were scored on the power-play to erase an early 3-0 deficit. Forwards Adam Cracknell, Mike Carcone and Milos Kelemen had the three special-teams scores for the Roadrunners in the 6-3 victory.

Saturday’s series opener with the San Jose Barracuda was Hockey Fights Cancer Night at the Tucson Arena. The Roadrunners debuted their new White Kachina Alternate jerseys to the tune of a 6-3 comeback win over the Barracuda. Last season, Tucson won their Cancer Awareness Night contest on February 26, 2022, against the Ontario Reign, as Mike Carcone netted a hat trick and both Jan Jenik (2g 1a) and Ben McCartney (1g 2a) notched multi-point nights.

“That was a quick hat trick to North America. I’m happy for him, hard work pays off. You ask [Milos] to do anything and he does it. He got rewarded for the work he’s put in this season. He always gets his chances from his work ethic, and to see him get rewarded for that is huge for us and huge for him.”

Tucson Captain Adam Cracknell on linemate Milos Kelemen, who recorded his first North American hat trick in his 13th game as a member of the Roadrunners on Saturday.

The Barracuda scored the first goal of Saturday’s game on their first shot of the contest, as they took a 1-0 lead 10:33 into the opening frame with the power-play strike. San Jose extended their first-period lead less than a minute later with their second power-play goal of the period, as they had earned three of the first four trips to the man-advantage. The Barracuda continued their strong start to the series opener with their first even-strength goal of the game, pushing their lead to 3-0 late in the opening period. The Roadrunners avoided being shutout in the first, as a late power-play led to a goal by Captain Adam Cracknell to make the score 3-1 entering the second period of play. Coming shortly after a fight between Tucson’s Ryan McGregor and San Jose’s Montana Onyebuchi, the score was Cracknell’s fourth goal of the season and second against the Barracuda. Cracknell also netted the lone shootout goal in Tucson’s 4-3 win over San Jose on October 29. Still trailing 3-1, the Roadrunners went on their eighth power-play of the contest to set a new season high for trips to the man-advantage with 8:41 remaining in the second period. Tucson added their second power-play goal of the night, matching San Jose and cutting the Barracuda lead to 3-2 with Mike Carcone’s sixth goal of the year. With 1:11 left to play in the second period, the Roadrunners pulled even with the Barracuda with their third-straight power-play strike to come all the way back from down 3-0 late in the first. The equalizer was scored by Milos Kelemen for his fourth goal of the season and first while on the man-advantage. The pair of power-play goals for Tucson in the back half of the middle frame made it a brand-new game entering the final 20 minutes of action with the score tied at 3-3. After being down 3-0 with 3:45 left in the first period, the Roadrunners took their first lead of the game with 7:31 left to play in the third period. Milos Kelemen scored his second-straight goal of the game and fifth of the season to make it a 4-3 advantage for Tucson. The Roadrunners weren’t satisfied by just taking the lead, as Nathan Smith netted an insurance goal 1:24 later, his third goal of the season. With just under two minutes to play in regulation, Milos Kelemen scored on the empty net to complete the hat trick and secure a 6-3 victory for the Roadrunners.