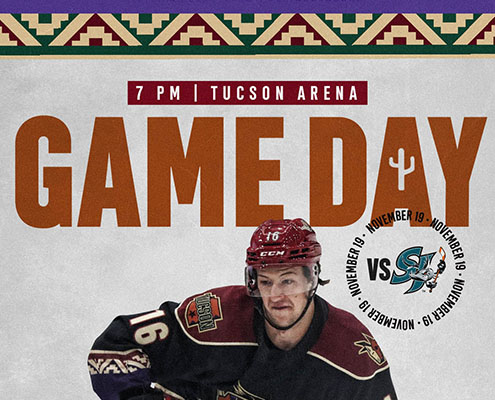 The 7-4-1-0 Tucson Roadrunners open a two-game set with the San Jose Barracuda Saturday night at the Tucson Arena. The pair of games with the San Jose Sharks AHL affiliate will close out Tucson’s current six-game home stand, tied for the longest of the season. Tucson will look to remain perfect on the season against San Jose, after a two-game sweep of the Barracuda to close out the month of October. Saturday’s game will also be Hockey Fights Cancer Night at the Tucson Arena, with the Roadrunners debuting their new White Kachina Alternate Jerseys.

Three Things
1) The Roadrunners and Barracuda have already met twice this season in a weekend series at the new Tech CU Arena in San Jose October 28 and 29. Tucson won both games by scores of 5-1 and 4-3 to open the season series against the Barracuda. After San Jose opened the scoring in the series opener with a power-play strike 12:46 into the first period, the Roadrunners tacked on five unanswered goals across the second and third frames to come away with the win. San Jose answered back in the series finale by scoring three-straight goals in the second period to take a 3-2 lead, before Mike Carcone lit the lamp less than a minute later to even the contest at 3-3. After a scoreless third period and three-on-three overtime, the Roadrunners won their first shootout of the season with an Adam Cracknell goal and a three-for-three performance from netminder Jon Gillies.

2) Tucson is coming off a strong 6-2 win over the Henderson Silver Knights on Wednesday to close out the second of three two-game series on their home stand. The win is tied for the largest margin of victory for the Roadrunners this season, which they previously accomplished in a 5-1 win over the San Jose Barracuda on Friday, October 28. The six goals for Tucson also marked a season high, as 12 different players recorded a point in the win. Roadrunners backstop Ivan Prosvetov earned his second win of the season against the Silver Knights and fifth victory overall on the season, stopping 29 of 31 shots faced. In his only previous start against San Jose this year on October 28, Prosvetov made a season-high 38 saves and allowed just one goal.

3) Over their last three games at the Tucson Arena, the Roadrunners have been getting on the board early with eight first-period goals. In the opening period of Wednesday’s series finale with the Henderson Silver Knights, the Roadrunners offense exploded for their second four-goal period of the year, already matching the number of four-goal frames from last season. Tucson has scored four goals in just the opening 4:22 of their last three first periods, with Captain Adam Cracknell’s goal ten seconds into their contest with the Coachella Valley Firebirds setting a new franchise record for the fastest score to start a game.

“We’ve been saying all week that we want to play well in front of our fans and in our building. A lot of times it’s hard to come off the road after a long trip and give the best effort. It’s a natural thing, guys let off a little bit. This weekend will provide us that opportunity to really do our best in front of the fans, and hopefully they enjoy what they see.”

Tucson Head Coach Steve Potvin on the weekend series with the San Jose Barracuda. The two-game set at the Tucson Arena concludes a six-game stretch for the Roadrunners on their home ice, tied for the longest home stand of the year.

Number to Know
170 – The number of combined penalty minutes in the last outing between the Roadrunners and San Jose Barracuda on Saturday, October 29. 120 of the 170 total minutes came prior to the opening face-off, with a brawl between the starting lineups that resulted in four players from each team receiving game misconducts. The nearly three hours of combined penalty minutes is both a Roadrunners franchise record and a season high in the American Hockey League this year. Tucson also set an individual franchise record for most penalty minutes in a game, as they racked up 86 of the 170 total minutes.

We’re Doing It Live
Tonight’s game will be broadcast on AHLtv, as well as on the radio on FOX Sports 1450AM and the iHeartRadio app. Coverage will begin at 6:45 p.m. with Roadrunners Warm-Up hosted by Jimmy Peebles, before “Voice of the Roadrunners” Adrian Denny has all the action from the Tucson Arena.