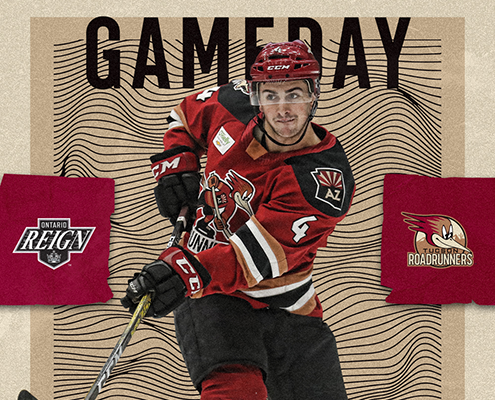 The Tucson Roadrunners face-off against the Ontario Reign for the second straight night Wednesday at the Tucson Arena. Tucson outshot the Reign Tuesday night 36 to 24 and will be looking to get the win in game two of the series.

Three Things
1) The Tucson Roadrunners have drawn more power-plays than their opposition in five of the last six games, after drawing six of the eight power-plays on Tuesday. If this ratio continues, look for pucks to start finding the back of the net when on the advantage.

2) Roadrunners forward Barrett Hayton netted his first goal of the season in the third period of Tuesday night’s game versus Ontario. Hayton, the Arizona Coyotes 2018 fifth overall pick, spent five games in Tucson with the Roadrunners last season on a conditioning assignment, recording five points in his time with the team.

3) Be on the lookout on social media Wednesday afternoon from 4 p.m. to 6 p.m., as the Roadrunners Traditional Opening Week Red Carpet Walk will be posted all across the team’s social media pages as players arrive at the arena. This Tucson tradition will feature fan-favorite players, along with a certain team mascot in the mix.

What’s The Word?
Tucson Roadrunners forward Michael Bunting on bouncing back after Tuesday night’s loss to the Ontario Reign at the TCC:

“We’re just trying to talk to the boys and get through this rough patch. We have enough skill in this locker room and a great group of guys. I know this one stung, but I think tomorrow is going to be a totally different game.”

Number to Know
68 – The Tucson Roadrunners shot differential in their six games. Tucson is outshooting their opponents 230 to 162 and will look to continue their barrage of shots on goal Wednesday night versus Ontario.