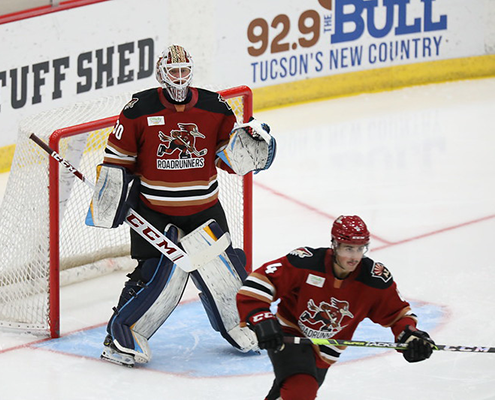 Tucson, Arizona – The Tucson Roadrunners once again outshot their opponents in the Ontario Reign Wednesday night, but ultimately were outscored 6-2 and suffered their second loss of the homestand.

Ontario jumped out to an early 2-0 lead in the first period, with one of the goals coming on the power-play. Tucson lit the lamp for the first time in the contest three and a half minutes into the second period off the stick of Lane Pederson, his sixth of the year. Ontario answered back on the ensuing face-off to keep their lead at two. The Reign poured on two more goals that period, including a shorthanded score by Aidan Dudas. Tucson found a spark near the end of the second period, as Mike Carcone scored his fourth goal of the year on the Roadrunners power-play. The third period featured five combined penalties between the two teams, but only one score in the form of an empty net tally for Ontario in the final 1:30 of the game. Chris Nell made his first start for the Tucson Roadrunners this season, making 26 saves in the process.

The Roadrunners continue Fan Week on Saturday against the San Diego Gulls 5 p.m. MST. The game will be broadcast live on television on the Tucson CW. You can also listen to the game in Tucson on FOX Sports 1450 AM and on the iHeart Radio app or watch the game on AHL TV.

“There’s so many moving parts this season, there’s ups, downs, callups, guys that are fighting for contracts. It’s a shortened season, so there’s a lot to consider but I enjoy the challenge, it’s part of the business. To be honest I’m looking forward to tomorrow morning and getting back to the rink and trying to find a way to get these guys to buy in and there’s no doubt in my mind that these guys can do it. We have the ability in the room and a lot of good character. We have some things to sort out but the belief in the team is still very vibrant and I’m looking forward to this challenge.”

Tucson Roadrunners head coach Steve Potvin after the game on Tucson’s plan to bounce back this weekend against the San Diego Gulls.

MAKING THE MAN ADVANTAGE COUNT – The Tucson Roadrunners scored their seventh power-play goal of the season in the waning moments of the second period. Mike Carcone gave the Roadrunners a much-needed spark as he found the back of the net with 1:29 to go in the period, assisted by Cam Dineen and Brayden Burke.

Tucson Roadrunners veteran forward Lane Pederson lit the lamp early in the second period Wednesday night, assisted by fellow fan-favorites Michael Bunting and Kyle Capobianco. Pederson, who has been with the Roadrunners since the 2017-18 season, leads the team in points so far this season with six goals and ten assists.

Wednesday night saw the return of the Tucson Roadrunners red carpet, a tradition that captures photos of Southern Arizona’s favorite skaters as they arrive at the arena. Pictured here is fifth-year Roadrunner Michael Bunting arriving in style prior to the game.