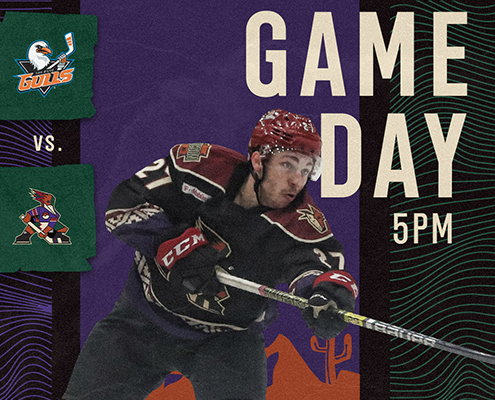 The Tucson Roadrunners host the San Diego Gulls for a pair of weekend matchups with their I-8 rivals. Tucson defeated San Diego a week ago in Irvine by a score of 4-1. The back-to-back games are both scheduled to start at 5 p.m., with the first game being broadcast locally on The CW Tucson Saturday night.

Three Things
1) The Tucson Roadrunners are 1-0 so far this season against the San Diego Gulls, after a dominant 4-1 victory over the Gulls in Irvine last Saturday. Eight different Roadrunners recorded points in the win, including multiple points from Kevin Roy, Nate Sucese, Lane Pederson, and Ryan McGregor.

2) Tensions were high in the last meeting between the Roadrunners and Gulls, with each team racking up 39 penalty minutes apiece. Tucson’s Jeremy Gregoire, Jan Jenik and Jeremy Greogire a second time dropped the gloves to take on Gulls players in the latter half of the second period. The second period also featured the first two of the Roadrunners three unanswered goals to end the contest, including Michael Bunting’s eventual game-winning goal 4:18 into the period.

3) Saturday’s Tucson Roadrunners game will be broadcast live on The CW Tucson and will feature a number of pregame festivities. The team will be introducing their 2021 roster and raise their 2019-20 AHL Pacific Division championship banner in front of a limited capacity crowd. Face-off is at 5:00 p.m., and the broadcast will feature “voice of the Roadrunners” Adrian Denny, along with Roadrunners Happy Hour co-host Brett Fera. The games Saturday and Sunday are both sold out, but tickets are available for Tucson’s next home game, which is March 31 against the Henderson Silver Knights.

What’s The Word?
Tucson Roadrunners defenseman Dysin Mayo on cutting down on mistakes in the defensive zone, and limiting scoring opportunities for their opponents:

“We’ve been putting [our goalies] in tough situations and they’ve been making some big saves. When you give teams two-on-ones and breakaways it’s just a matter of time before they score no matter who’s in net.”

Number to Know
43 – The number of shots on goal the Tucson Roadrunners recorded last Saturday against the San Diego Gulls, a 4-1 win in Irvine. Tucson outshot the Gulls by 26 shots, with more shots in the second period (18) than San Diego produced all game (17). With San Diego coming to the Tucson Arena for a pair of games, look for the Roadrunners to send a high volume of shots toward the opposing net.

We’re Doing It Live
Roadrunners Hockey returns to the radio today at 5:00 p.m. as “Voice of the Roadrunners” Adrian Denny brings you all of the action on Fox Sports 1450 AM. Saturday’s game will be broadcast locally on The CW Tucson. All Roadrunners games are broadcast live on Tucson’s Sports Station, along with AHLtv.