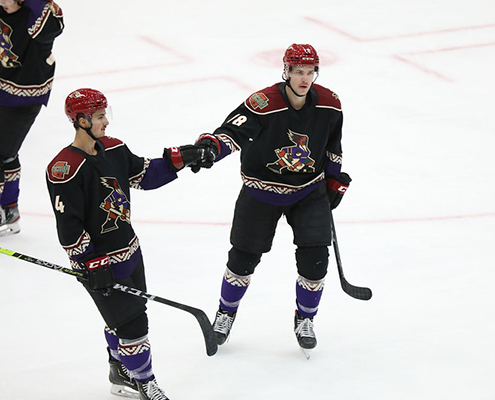 Tucson, Arizona – The Tucson Roadrunners were firing on all cylinders in Saturday night’s 6-2 win over the San Diego Gulls, scoring five unanswered goals during the first period. The game was broadcast live on The Tucson CW, the second Roadrunners matchup to be on TV this season. Prior to face-off, the Roadrunners introduced their roster and unveiled their 2019-20 Pacific Division championship banner.

Saturday night’s game saw the opposition score first for the third straight game, as San Diego got on the board within the first two minutes. Tucson was not interested in playing from behind and answered back much louder than San Diego anticipated. The Roadrunners scored five unanswered goals throughout the rest of period, including two from Ryan McGregor, and Kevin Roy’s team-leading eighth goal of the season. San Diego once again struck first in the second period, but Tucson equaled San Diego’s goal total for the period with Lane Pederson’s seventh tally of the year. Despite a first period that featured six total goals and a second period that saw two more added on, the third period was quiet, and the final score was 6-2 in Tucson’s favor. Connor LaCouvee excelled in net for the Roadrunners, stopping 40 of the 42 shots he faced, a season-high in saves for Tucson Roadrunners goaltenders this season, and a career-high for LaCouvee. The Roadrunners are now 2-0 against the Gulls on the season and will face them again Sunday evening and the following weekend.

The Roadrunners wrap up Fan Week on Sunday against the San Diego Gulls at 5 p.m. MST. You can listen to the game in Tucson on FOX Sports 1450 AM and on the iHeart Radio app or watch the game on AHL TV.

“Every day is important this season, for us we’re really trying to implement that ‘walk the line’ type of winner’s mentality where you have to bring it no matter what the results. I think that’s been a consistent message with our team and it’s what we’re going to try to accomplish again [Sunday].”

Tucson Roadrunners Head Coach Steve Potvin after the game on the importance of every game in the abbreviated 2021 season, and the team’s plan going into Sunday’s series finale with San Diego.

Watch Tucson Roadrunners forward Ryan McGregor cash in for the second time of Saturday night’s game, assisted by Jeremy Gregoire. Saturday was McGregor’s second multi-point outing of the season, and his first game with multiple goals. McGregor is in his first year with the Tucson Roadrunners, and spent last season with the Sarnia Sting of the OHL.

Kevin Roy skates on the ice during warmups prior to Tucson’s televised 6-2 win over San Diego Saturday night at the Tucson Arena. Roy, who spent his first four seasons in the AHL as a member of the San Diego Gulls, leads the Roadrunners in goals this season with eight, including a score during the second period against his former team.