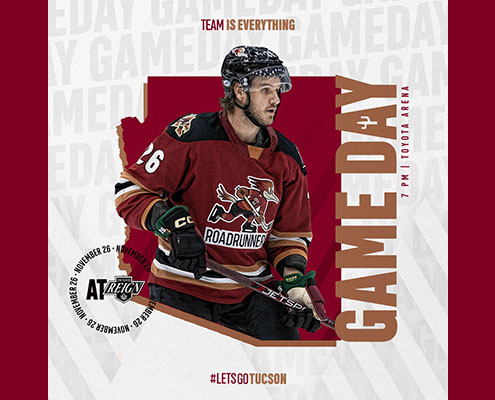 The 9-5-1-0 Tucson Roadrunners reach the second stop of their five-game road trip Saturday night, as they’ll begin a two-game series with the Ontario Reign. Saturday marks the first meeting between the Roadrunners and the AHL affiliate of the Los Angeles Kings, as Tucson and Ontario enter the series with near identical records of 9-5-1-0 and 9-5-0-1, respectively. The Roadrunners come into their final two games of November having won three of their last four contests, while the Reign carry a winning streak of two games into Saturday night.

Three Things
1) The Roadrunners are coming off a 3-1 win on Wednesday night over their I-8 Border Rivals: The San Diego Gulls. The victory opened Tucson’s current five-game road trip, as a Ben McCartney goal 6:55 into the opening frame gave the Roadrunners the lead for the remainder of the contest. Goaltender Ivan Prosvetov earned his sixth win of the season, as he took a shutout into the final two and a half minutes of regulation and finished the outing with 30 saves. Prosvetov’s six wins are tied for the second most in the AHL’s Pacific Division with Ontario Reign backstop Pheonix Copley and San Diego Gulls netminder Lukas Dostal.

2) With an assist in Wednesday’s win over San Diego, Roadrunners forward Mike Carcone became the eighth player in the AHL to amass 20 total points this season. Carcone enters the weekend series having tallied a point in six-straight outings against the Reign, with 10 points (6g 4a) in eight total meetings last year between Tucson and Ontario. His eight points (1g 7a) in seven road contests this season leads the Roadrunners. Carcone tallied his second of two hat tricks in February of 2022 on the 26th of the month against Ontario, in the first game of a two-game weekend set with the Reign.

3) Hours before Tucson’s Wednesday-night matchup with the San Diego Gulls, the Arizona Coyotes made a trade to bring a big addition to the Roadrunners roster. The Coyotes sent defenseman Conor Timmins to the Toronto Maple Leafs in exchange for six-foot-nine center Curtis Douglas. The 22-year-old was drafted in the fourth round of the 2018 NHL Entry Draft by the Dallas Stars and recorded 34 points (13g 21a) in 67 games last year as a member of the Toronto Marlies. Following the trade, the Coyotes loaned Douglas to the Roadrunners to remain in the AHL where he has a pair of fights through 13 games this season with the Marlies.

“Our PK is great, we have experienced guys playing on it. Cam Crotty is a big penalty killer for us, and his blocks are huge for me as a goalie.”

Tucson Goaltender Ivan Prosvetov on the Roadrunners penalty-kill unit that fended off an extended five-on-three situation in Wednesday’s win in San Diego.

Number to Know
8 – The number of goals scored by the Roadrunners in their first meeting with the Ontario Reign last year on November 12, 2021. Current Tucson skaters Mike Carcone (1g 1a), Cameron Hebig (1g 1a) and Victor Soderstrom (2a) recorded multiple-point performances, along with big nights from current Arizona Coyotes fixtures Matias Maccelli (3g 2a) and JJ Moser (1g 2a). Forwards Jan Jenik and Boko Imama also scored goals as the Roadrunners cruised to an 8-4 victory at the Tucson Arena.

We’re Doing It Live
Tonight’s game will be broadcast on AHLtv, as well as on the radio on FOX Sports 1450AM and the iHeartRadio app. Coverage will begin at 6:45 p.m. with Roadrunners Warm-Up hosted by Jimmy Peebles, before “Voice of the Roadrunners” Adrian Denny has all the action from the Toyota Arena. In addition, please take note that Sunday’s game scheduled for 4 p.m. MST will stream audio live at TucsonRoadrunners.com with video on AHLtv.