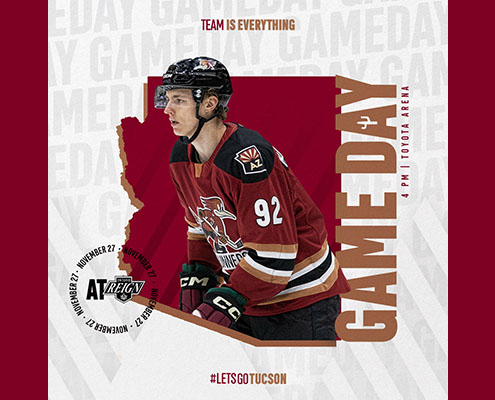 LISTEN LIVE (TODAY ONLY) HERE
Tonight’s game will not be heard on Fox Sports 1450AM and iHeartRadio.

The 10-5-1-0 Tucson Roadrunners wrap up their weekend series with the Ontario Reign Sunday afternoon at the Toyota Arena in Ontario, as Tucson seeks their third-straight win to open a five-game road trip. The Roadrunners took care of business in the series opener with the AHL affiliate of the Los Angeles Kings Saturday night with a 3-1 win that saw Tucson lead for the final 38:13 of regulation. A win Sunday would tie the Roadrunners with Coachella Valley for the most road wins in the AHL’s Pacific Division this season with seven, and would improve their Division-best .750 winning percentage as the away team.

Three Things
1) Tucson’s 3-1 win over the Reign Saturday night was a rare low-scoring matchup between the AHL’s Arizona Coyotes and the AHL’s Los Angeles Kings. The three Roadrunners goals represented the lowest total for the winning team in regulation since a 3-2 Tucson victory on November 23, 2019, in Arizona. In addition, the four total goals marked the lowest combined score between the Roadrunners and Reign since a 3-1 Ontario win on March 8, 2019. By comparison, both Tucson and Ontario scored three goals in all but one of their eight meetings last season, with an average combined score of 9.125 goals per-game.

2) Roadrunners forward J.S. Dea’s power-play strike early in the second period proved to be the difference in Saturday’s series opener with the Reign. Dea’s team-leading eighth goal of the season came on Tucson’s first man-advantage of the night and served as the eventual game-winning score.  The Roadrunners are now 7-0-1-0 on the year when scoring a power-play goal, and have matched or outnumbered their opponents in trips to the man-advantage in each of their last seven outings. On the other side of special teams, Tucson has kicked off their current road trip by going back-to-back games without allowing a power-play goal for the first time this season.

3) The forward line comprised of second-year Roadrunners Boko Imama, Travis Barron and Hudson Elynuik was a key piece of Saturday’s 3-1 win over the Ontario Reign in the series opener. The three combined for Tucson’s first goal of the game with 17:08 gone by in the first period: a Boko Imama shot that was deflected by Travis Barron for Barron’s third goal of the season. Hudson Elynuik registered the secondary assist on the initial goal and followed it up by drawing a high-sticking penalty on Ontario that led to Tucson’s second goal of the contest to retake the lead at 2-1. Saturday was Imama’s first outing with Tucson since October 28 in San Jose, as the 26-year-old has recorded three points (1g 2a) in four games this year. Barron has tallied three points (1g 2a) over the first two contests of the Roadrunners current five-game road trip, and Elynuik has notched an assist in two of his last three appearances.

Tucson forward J.S. Dea on the significance of a win in Sunday’s series finale with the Ontario Reign. The Roadrunners and Reign entered the weekend set with identical records before Tucson took the series opener Saturday night.

Number to Know
8 – The number of multi-goal wins by the Roadrunners this season through 16 games. Half of those wins have come on the road, including the back-to-back 3-1 victories to begin Tucson’s current five-game road trip. Six of the eight multi-goal wins have also been capped off by empty-net strikes, with J.S. Dea on Wednesday and Adam Cracknell on Saturday lighting the lamp in the final minutes of Tucson’s triumphs this week in California.

We’re Doing It Live
Today’s game will be broadcast on AHLtv, as well as an audio livestream available at TucsonRoadrunners.com. Coverage will begin at 3:45 p.m. with Roadrunners Warm-Up hosted by Jimmy Peebles, before “Voice of the Roadrunners” Adrian Denny has all the action from the Toyota Arena. Today’s game only will not be broadcast on Fox Sports 1450AM or iHeartRadio.