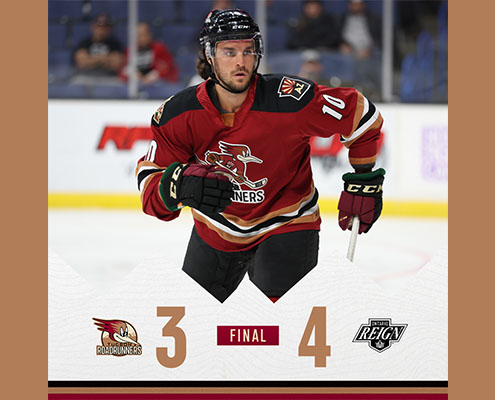 Ontario, California – The Tucson Roadrunners met with the Ontario Reign for the second-straight evening at the Toyota Arena on Sunday. Despite a three-goal third period, the Roadrunners fell to the Reign by a score of 4-3 to split the weekend set with the AHL affiliate of the Los Angeles Kings. J.S. Dea extended his team lead for goals with his ninth tally of the season, while Laurent Dauphin (1g 1a) and Cam Dineen (2a) notched multiple-point performances. Goaltender Ivan Prosvetov was in net for his first start of the season against Ontario, as he stopped 26 shots for his fourth consecutive outing with at least 26 saves made. After winning two of the first three contests on this five-game road trip, Tucson is now 10-6-1-0 on the season and will return home for a week of practice before facing the San Jose Barracuda Saturday and Sunday at the Tech CU Arena.

Roadrunners forward Nathan Smith put Tucson on the board in their series finale with the Ontario Reign Sunday evening. Smith netted his fourth goal of the season to cut Ontario’s lead to 3-1 with 8:11 gone by in the final frame of action. Three of the 24-year-old’s four goals this year have come on the road, as Smith is up to eight points (4g 4a) through 17 games in his first season as a Roadrunner.

QUICK WORK – The Roadrunners turned a late 4-1 deficit into a 4-3 disadvantage in the span of just 36 seconds with goals by Laurent Dauphin and J.S. Dea. The pair of third-period goals came with Tucson goaltender Ivan Prosvetov pulled for an extra attacker and marked the fastest consecutive goals scored by Tucson this season. In his first season with the Roadrunners, Dea leads the team in goals with nine while Dauphin is tied with Mike Carcone and Milos Kelemen for second with six. The pair each have three points in as many games on Tucson’s current road trip, with Dea’s three consecutive games with a goal marking the longest streak by a Roadrunner this year.

Tucson forward J.S. Dea scored his team-leading ninth goal of the season late in the third period of Sunday’s series finale against the Ontario Reign. Sunday marked the third-straight game to open the Roadrunners current road trip in which Dea scored a goal. The three strikes for the first-year Roadrunner since Wednesday in San Diego have been scored in three different situations: on an empty net on Wednesday, during a Tucson power-play on Saturday, and with a 6-on-5 empty-net advantage for the Roadrunners on Sunday.

“I think we made a good push, and it shows just how mentally tough our team is. It was good to bounce like that when we were down 3-0 heading into the third period and make it a one-goal game. It was a good week (overall), and now we have a full week here to recover and get back at it next weekend (in San Jose).”

Roadrunners forward Nathan Smith on Sunday’s series finale with Ontario and Tucson’s three road games this week as a whole to open a five-game road trip.

Despite both Tucson and Ontario starting different goaltenders than Saturday’s 3-1 Roadrunners win, the netminders in Sunday’s series finale kept up the standard set the night before by their counterparts. The opening 19:12 of the contest was without a goal, before the Roadrunners faced back-to-back penalty-kills late in period that led to the Reign taking a 1-0 lead into the first intermission. The power-play goal with 48 seconds left in the opening frame gave the Reign their first lead of the weekend on their second man-advantage of Sunday’s contest, after Tucson faced just one shorthanded situation in Saturday’s series opener with Ontario. The Reign extended their lead just past the midway point of the second period with their second power-play goal of the contest, and then scored their first five-on-five goal of the night with 1:47 still remaining in the middle frame. Following the goal to make it a 3-0 advantage for the Reign, an altercation between Tucson’s Boko Imama and Ontario’s Nate Thompson earned each player two minutes for unsportsmanlike conduct, five minutes for fighting, and a ten-minute game misconduct for fighting at the puck drop. The bout was Imama’s first of the season, after the 26-year-old led the AHL in penalty minutes last year in his first campaign as a Roadrunner with 178. The Roadrunners entered the final 20 minutes of play still trailing 3-0, but first-year forward Nathan Smith’s fourth tally of the season got Tucson on the board with 11:49 still on the clock. Ontario answered back with forward Quinton Byfield’s second goal of the game to push their lead back out to 4-1 with 4:19 remaining in regulation. The Roadrunners kept fighting and scored a pair of six-on-five goals just 36 seconds apart to pull back to within one of the Reign for the first time since the second period. The goals were netted by forwards Laurent Dauphin and J.S. Dea and set a new mark for the fastest consecutive goals by Tucson this year. The Roadrunners weren’t able to light the lamp again for the final 1:59 of the contest, as Ontario came away with a 4-3 victory to split the weekend series at the Toyota Arena.

Tucson Roadrunners Road Ahead: Back With The Barracuda
Scroll to top