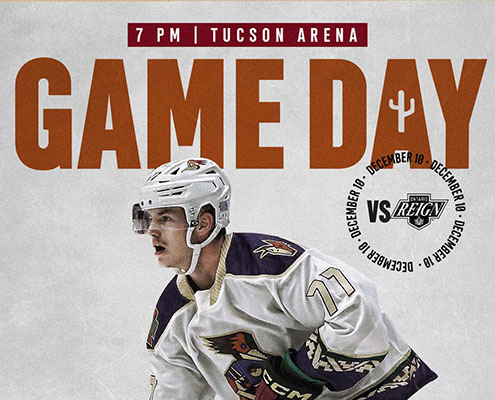 The 10-7-3-0 Tucson Roadrunners wrap up their weekend set against Ontario Reign Saturday night at the Tucson Arena. The Reign took the series opener with a 4-3 overtime victory, marking the second-straight game to go past regulation for the Roadrunners. Saturday’s game is also the fan-favorite Teddy Bear Toss Night, with fans encouraged to bring stuffed animals to throw onto the ice after Tucson’s first goal of the contest. The series finale with the AHL affiliate of the Ontario Reign will be televised live in Southern Arizona on The CW Tucson, with Tucson.com’s Brett Fera joining “Voice of the Roadrunners” Adrian Denny for the second of six scheduled television broadcasts during the 2022-2023 season.

Three Things
1) Roadrunners Captain Adam Cracknell factored into all three of Tucson’s goals in their series opener against Ontario Friday, as the 37-year-old notched his first three-point performance of the season with two goals and an assist. Cracknell has posted three-straight multi-point outings for the first time in his American Hockey League career and enters Saturday fourth on the team with 15 points (8g 7a). His linemate and Alternate Captain Mike Carcone extended his team-leading point streak to five games with a goal and an assist in the first period. Entering play Saturday, Carcone is tied for fifth in the AHL overall with 26 points (8g 18a) in 19 games this season.

3) With a win in the series finale with Ontario, Tucson can improve to 4-0-1-0 at home on Saturdays this year. The Roadrunners have earned a point in all four of their Saturday matchups at the Tucson Arena and are 4-2-1-0 on the season overall on Saturday. Their only better day of the week this year has been Wednesday, where the Roadrunners are a perfect 3-0-0-0. Their current four-game home stand concludes with a matchup against the Coachella Valley Firebirds on Wednesday. In addition, Tucson is 2-1-1-0 in the second game of a two-game set on their home ice this year entering Saturday’s series finale.

“He’s a great player and he’s had a lot of success in this league. He’s very easy to play with, and there’s a reason he’s been playing for so long.”

Forward Mike Carcone on linemate and Team Captain Adam Cracknell. The pair combined for Tucson’s first two goals on Friday against Ontario, as each finished the opening frame with a goal and an assist. Cracknell went on to record his first three-point night of the season with another goal.

Number to Know
47 – The number of shots on goal recorded by the Roadrunners in Friday’s series opener with the Ontario Reign, a new season high. In addition, Tucson fired off the most shots in a period this year with 23 in the middle frame, while only allowing two shots by the Reign in the second period. Friday was also third time this season where the Roadrunners held an opponent to two shots or less in a period, with the 23-2 representing the largest shot differential in a frame this year for Tucson. The Roadrunners have now set a season-high for shots in back-to-back games dating back to December 4 in San Jose (43), and average 39.33 shots on goal per-game in three meetings with Ontario this year.

We’re Doing It Live
Tonight’s game will be televised live in Southern Arizona on The CW Tucson, as “Voice of the Roadrunners” Adrian Denny will be joined by Tucson.com’s Brett Fera. The game will also be broadcast live on AHLtv, as well as on the radio at FOX Sports 1450AM and the iHeartRadio app. Coverage will begin at 6:45 p.m. with Roadrunners Warm-Up hosted by Jimmy Peebles.

RRTV In The Community: Holiday Hustle and Bustle
Scroll to top