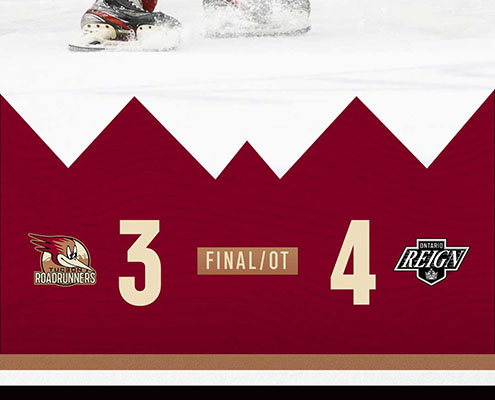 Tucson, Arizona – The Tucson Roadrunners opened a four-game home stand Friday night against the Ontario Reign, AHL affiliate of the Los Angeles Kings. The Roadrunners and Reign traded goals through regulation before a power-play strike by Ontario secured a 4-3 overtime win for the visiting team, as Tucson earned a standings point in overtime for the second-straight game. Tucson Captain Adam Cracknell factored into all three of the Roadrunners goals with his first three-point night of the season, and third-straight multi-point outing. The Roadrunners fall to 10-7-3-0 and will wrap up the weekend set with Ontario Saturday night at 7 p.m. Ahead of Saturday’s Teddy Bear Toss, hundreds of toys were donated as fans entered Tucson Arena Friday night that Mascot Dusty will deliver to Banner Health’s Diamond Children’s Medical Center on Monday. Saturday’s series finale will also be televised live in Southern Arizona on The CW Tucson, with Tucson.com’s Brett Fera joining “Voice of the Roadrunners” Adrian Denny for the broadcast.

Team Captain Adam Cracknell tallied his first three-point performance of the season and his third consecutive multi-point outing Friday night against the Ontario Reign. Cracknell finished the first period with a goal and assist, before adding his second goal late in the middle frame to give Tucson a 3-2 lead.

SHOTS TO SPARE – The Roadrunners set a season high for shots on goal in Friday’s series opener against Ontario, with 47 shots on Reign netminder Cal Petersen. Friday’s middle frame also set a season high for shots in a single period with 23. At an individual level, Mike Carcone notched a season-high eight shots on goal for the second-straight game, as he recorded a multi-point performance (1g 1a) for the second consecutive outing.

Tucson forward Ben McCartney dropped the gloves for the second time in three games this season against the Ontario Reign on Friday. McCartney took on Taylor Ward in Friday’s contest at the Tucson Arena to close out the first period, after the 21-year-old exchanged blows with Jacob Moverare on November 26 in Ontario for his first fight of the season.

“We know we can play well against them. When we do the right things, we generate success. Their goalie made some huge saves in overtime, but we gave ourselves a really good chance [to win].”

Roadrunners Captain Adam Cracknell on the team’s effort in Friday’s series opener with the Ontario Reign. Tucson recorded a season-high 47 shots on goal, while Cracknell notched two goals and an assist.

The Roadrunners got the scoring started for their third-straight game in Friday’s series opener, as Mike Carcone netted his eighth of the season with 7:02 gone by in the first period. Ontario answered back with a power-play strike 4:07 later on their second trip to the man-advantage of the contest to even the score at 1-1. Tucson took the lead right back with Adam Cracknell’s seventh goal of the season just 2:04 after the Reign got on the board to make it 2-1. The goal gave both Cracknell and Carcone multiple-point outings, as they traded roles on the first two goals of the game for the Roadrunners. Cracknell’s go-ahead score was the final goal of the first period, as Tucson entered the first intermission still up by one. As the opening frame came to a close, a fight broke out between Ben McCartney and Ontario’s Taylor Ward for McCartney’s second bout of the season, with both against the Reign. Despite the fight to end the first period, the middle frame began with both teams skating five-on-five. Ontario scored their first five-on-five goal of the contest with 2:23 gone by in the period to even the score back up at 2-2. With 6:32 to play in the second period, Adam Cracknell gave the Roadrunners the lead again with his second-straight goal of the game. The Tucson Captain deflected a shot from Cam Crotty for his third point of the game (2g 1a), as the Roadrunners had their third lead of the contest at 3-2 late in the middle period. An Adam Cracknell goal once again was the end of the scoring for the period to send Tucson to the third frame with a one-goal lead. The Reign had another answer to a one-goal Roadrunners lead early in the third period, as their goal exactly four minutes into the frame evened up the score at 3-3. The final 16 minutes of regulation were without a goal, and Tucson and Ontario entered the three-on-three overtime still knotted at 3-3. With 2:29 gone by in overtime, the Reign netted a four-on-three power-play goal for a 4-3 win in the series opener at the Tucson Arena.