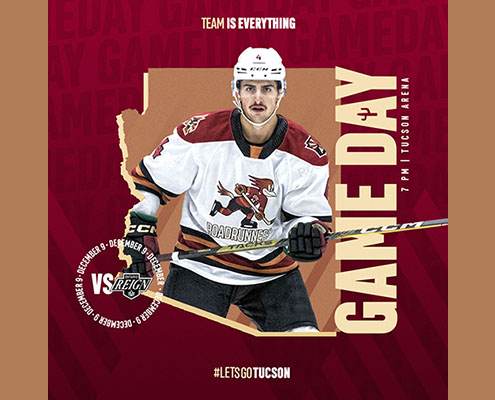 The 10-7-2-0 Tucson Roadrunners are back at the Tucson Arena Friday night to kick off a four-game home stand, beginning with a two-game set against the Ontario Reign. Tucson and the AHL affiliate of the Los Angeles Kings will meet for the third time this season at 7 p.m. to open the series. The Roadrunners are back home after a five-game road trip that included a stop in Ontario for a pair of matchups at the Toyota Arena Friday, November 26 and Saturday, November 27. While Tucson has been off since Sunday, the Reign are coming off of a 3-1 loss on their home ice to the Henderson Silver Knights on Wednesday, December 7.

Three Things
1) The Roadrunners and Reign split the two-game weekend series at the Toyota Arena on November 26 and 27, as part of Tucson’s recent five-game road trip. The Roadrunners narrowly outscored the Reign overall six to five, as they scored a goal in all three periods of their 3-1 win on November 26 and tallied a three-goal third period the following night. Roadrunners netminders Jon Gillies and Ivan Prosvetov combined for a .919 save percentage over the weekend in Ontario, as Gillies posted his second-most saves in a win this year with 31 on November 26.

2) Tucson took the series opener against Ontario on November 26 by a count of 3-1 for their fourth consecutive series-opening win on the road to start the season. In all, the Roadrunners are 6-3-0-0 in the first contest of a multi-game set this year, with five of the six wins being by multiple goals. Tucson won each series opener with the Reign on their home ice last season by scores of 8-4 and 6-5. Each of those wins featured a hat trick by a Roadrunner: Matias Maccelli on November 12, 2021, and Mike Carcone on February 26, 2022. In their last series opener at the Tucson Arena, the Roadrunners earned a 6-3 come-from-behind win over the San Jose Barracuda on November 19.

3) Friday’s matchup between the Roadrunners and Reign marks the start of a holiday-themed weekend at the Tucson Arena. The series opener with Ontario will feature a Toy Drive for Banner Health’s Diamond Children’s Medical Center, as well as a Holiday Ornament Giveaway for the first 1,000 fans courtesy of Tucson International Airport. After the game, a special postgame screening of the Holiday movie Elf will be shown inside the Arena for all fans. The following night is the Roadrunners Teddy Bear Toss, presented by TEP. Fans are encouraged to bring stuffed animals to throw onto the ice after Tucson’s first goal scored, with the Toy Drive for Diamond Children’s Medical Center continuing from the series opener. Tickets for both weekend contests, as well as the full four-game home stand, can be purchased HERE.

“It’s a classic movie, you can’t go wrong with any of it. The snowball fight is pretty funny, and also when he’s eating the pasta. That’s a good movie.”

Defenseman Devante Stephens on his favorite parts of the Holiday movie Elf, which will be shown at the Tucson Arena Friday night following the Roadrunners matchup with the Ontario Reign.

Number to Know
7 – The number of teams in the AHL Pacific Division with a winning record entering play Friday. Seven of the ten total teams in the Division possess double-digit wins and single-digit regulation losses, including each of Tucson’s opponents on the current home stand: the Ontario Reign and Coachella Valley Firebirds. Despite this, the Roadrunners have managed to earn at least a point in each series they’ve played in this season.

We’re Doing It Live
Today’s game will be broadcast live on AHLtv, as well as on the radio at FOX Sports 1450AM and the iHeartRadio app. Coverage will begin at 6:45 p.m. with Roadrunners Warm-Up hosted by Jimmy Peebles, before “Voice of the Roadrunners” Adrian Denny has all the action from the Tucson Arena.