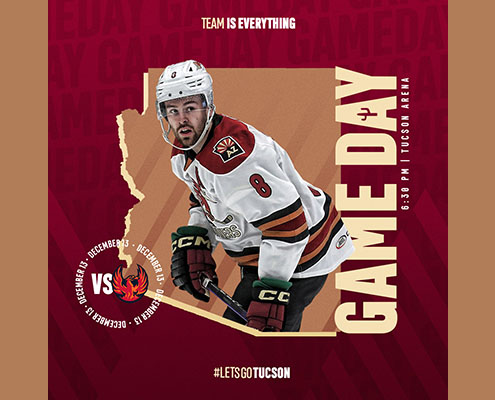 The 10-7-4-0 Tucson Roadrunners enter the back half of their current four-game home stand Tuesday night, as they’ll take on the Coachella Valley Firebirds at 6:30 p.m. at the Tucson Arena. The two-game set with the AHL affiliate of the Seattle Kraken Tuesday and Wednesday marks their second and final trip to the Old Pueblo in their inaugural season. The Roadrunners are coming off of a weekend series against the Ontario Reign that saw Tucson have their second and third consecutive games go past regulation. Coachella Valley’s last contest also went into overtime, a 5-4 loss to Bakersfield that snapped a five-game winning streak. Tuesday night is also the second $2 Twos-Day of the year, with $2 Popcorn and $2 Draft Beers for sale inside the Tucson Arena and select tickets available at half-price at the Tucson Arena Box Office.

Three Things
1) Tucson and Coachella Valley have already met twice on the season after a pair of games November 11 and 12 at the Tucson Arena. The Roadrunners earned a standings point in the series finale with a 4-3 overtime loss. In that game, Tucson tallied a three-goal first period that began with the fastest goal to start a contest in Roadrunners franchise history, scored by Captain Adam Cracknell ten seconds into the opening frame. With a 0-1-1-0 record against Coachella Valley, the Firebirds are the only one of seven opponents so far this season that Tucson has not won against. Despite a loaded AHL Pacific Division, the Roadrunners have an even or better point percentage against their other six opponents on the year.

2) The three Roadrunners that scored in the last meeting with Coachella Valley on Saturday, November 12 have been off to a strong start to the home stand in Adam Cracknell, Mike Carcone and Travis Barron. The three combined for four of Tucson’s goals over the pair of weekend games against Ontario, including the special Teddy Bear Toss Goal by Barron on Saturday. Cracknell and Carcone carry active point streaks of four and six games respectively into the series opener with Coachella Valley, as Cracknell has notched eight points (4g 4a) over the last four games. Carcone’s six-game point streak is tied for a season high, and the Roadrunners Alternate Captain enters the week tied for sixth in the American Hockey League for points with 27 (8g 19a).

3) The Roadrunners and Firebirds will face off four times over Tucson’s next five games beginning with Tuesday’s series opener at the Tucson Arena. Coachella Valley will host the Roadrunners in their first-ever contest at the Acrisure Arena on Sunday, December 18. The two-game set will wrap up on Tuesday, December 20 before Tucson returns home for their final two matchups before Christmas. The pair of series with the Firebirds is separated by a Saturday night meeting with the Gulls in San Diego on December 17.

“I think it’s crucial to make it like a playoff series and make it hard to play against us. We’re going to play [Coachella Valley] a lot so we need to make it tough to come into our building. I think if we play physical and play the right way they won’t want to face us.”

Forward Travis Barron on facing the Coachella Valley Firebirds four times over their next five games.

Number to Know
100 – The number of regular season American Hockey League goals scored by Roadrunners forward Mike Carcone. Carcone reached triple digits with his first-period goal on Friday, December 9 against Ontario. The 26-year-old has amassed 93 points (47g 46a) in 103 games since joining the Roadrunners in 2021. In addition, his second-period power-play goal against the San Jose Barracuda on Saturday, November 19 was his 200th career regular-season point in the AHL. Carcone currently has 209 points (100g 109a) in 353 regular season appearances.

We’re Doing It Live
Tonight’s game will be broadcast live on AHLtv, as well as on the radio at FOX Sports 1450AM and the iHeartRadio app. Coverage will begin at 5:00 p.m. with a special extended pregame edition of Roadrunners Happy Hour with Adrian Denny, Brett Fera and Kim Cota Robles. Pregame coverage continues at 6:15 with Roadrunners Warm-Up hosted by Jimmy Peebles, before “Voice of the Roadrunners” Adrian Denny has all the action from the Tucson Arena.