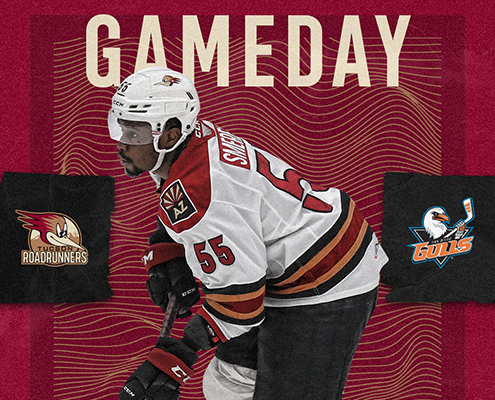 The Tucson Roadrunners travel to California one final time this season, to take on the San Diego Gulls in Irvine, wrapping up the season series. The Roadrunners will play two games in two nights against their I-8 rivals, with the first game taking place Friday night at 7:00 p.m. The two games mark the last time the Roadrunners will play without fans in attendance this season, as they’ll travel to Texas to face the Stars next week, then back to Tucson to end the regular season in front of a home crowd.

Three Things
1) The Tucson Roadrunners enter this series with a 3-3 record on the season against the rival San Diego Gulls. Tucson has outscored San Diego by five in six games so far this season, with 23 total goals for and 18 total goals against. Roadrunners forward Michael Carcone is the leading goal scorer against the San Diego Gulls, thanks in part to his four-goal performance against the Gulls on April 9. In that same game, Tucson forward Kevin Roy recorded five assists against his former team.

2) The Roadrunners will be relying on their rookie talent down the stretch, after three of their six goals in their three-game series with the Colorado Eagles last weekend were scored by first-year Roadrunners. Tucson has six rookies on their active roster, five of which have played at least 25 games this season. Leading the rookies with 11 and 10 points are forwards Nate Sucese and Ryan McGregor, who have each played in all 29 games for the Roadrunners this year.

What’s The Word?
Tucson Roadrunners defenseman Jordan Schmaltz on heading to Irvine this weekend for a pair of games with the San Diego Gulls, with the 2021 AHL season winding down:

“It’s coming down to the end of the year here with only seven games remaining. We’re looking to go into Irvine, steal a couple of wins and go from there. I think the last couple games, we’ve done some good things, we just have to play with a little more snarl and good things will come.”

Number to Know
2 – The number of power-play goals the Tucson Roadrunners have allowed in away games this season in 47 opponent chances on the man advantage, good for a 95.7 penalty-kill percentage on the road. Specials teams will be key in both games this weekend, as the Gulls enter the series with the second-best power-play percentage in the AHL Pacific Division.