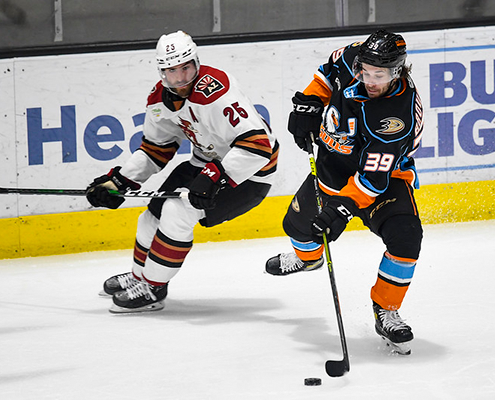 Irvine, California – The Tucson Roadrunners took one final trip west this weekend to take on the San Diego Gulls in a pair of games to finish off the season series with their I-8 border rivals. In yet another offensive battle of the birds, the Roadrunners fell short by a score of 5-3. Ivan Prosvetov started in net for the Roadrunners, making 28 saves for Tucson.

In a game where scoring first was a top priority, the Roadrunners wasted no time in doing so. Tyler Steenbergen scored his eighth of the season only 1:33 into the first period, setting a new season record for fastest goal to start a game for the Roadrunners. San Diego quickly answered back less than three minutes later, tying the game at one off the stick of Vinni Lettieri, his 13th goal of the season. San Diego went on their first power-play of the night shortly after their equalizing goal but came up short. The Roadrunners went on three-straight power-plays in quick succession, eventually cashing in on the third man advantage with Michael Carcone scoring his team-leading 13th goal of the season. The Roadrunners fended off another San Diego man advantage, bringing the total combined power-plays in the first period up to five, and sending the Roadrunners into the first intermission leading 2-1. The lead wouldn’t last for long into the second period, as San Diego evened the score at two goals apiece only 44 seconds into the middle frame with a score by Alex Limoges. Not long after that, the Gulls took their first lead of the night off a goal from Bryce Kindopp, making the score 3-2. The going stayed tough for Tucson when they received a five-minute major penalty and were down a forward for the rest of the night, with Kyle Neuber receiving a game misconduct penalty. Tucson got a break when they drew a penalty of their own during the San Diego five-minute power-play, turning the final 2:07 into mostly four-on-four hockey. After a pair of San Diego goals in the first 4:23 of the second period, the rest of the middle frame was quiet, and the Roadrunners entered the final period trailing by one. Tucson was faced with a four-minute penalty-kill to open the third period, ultimately killing it off but letting in a shorthanded goal shortly after, extending San Diego’s lead to 4-2. San Diego didn’t let off the gas, scoring on a delayed penalty to pull ahead 5-2 before the midway point of the third period. Tucson got back on the board midway through the third period with a goal by Jeremy Gregoire, his third of the season, reducing San Diego’s lead to 5-3. Fresh off his goal, Gregoire dropped the gloves with San Diego’s Kodie Curran, earning both players a penalty for fighting.

The Roadrunners will wrap up their season series with the San Diego Gulls Saturday, May 1 at 7:00 p.m. MST. The game will mark the eighth and final meeting between these two teams in the 2021 AHL campaign. You can listen to the game in Tucson on FOX Sports 1450 AM and on the iHeart Radio app or watch the game on AHL TV.

“We missed too many opportunities to score, and we gave up too many odd man attacks, and took too many penalties.”

Tucson Roadrunners Head Coach Steve Potvin after the game detailed what Tucson can improve on heading into Saturday night’s rematch with the San Diego Gulls.

Watch Tucson Roadrunners forward Tyler Steenbergen put the Roadrunners up 1-0 only 1:33 into the first period of Friday night’s matchup with the San Diego Gulls. The goal was Steenbergen’s eighth of the season, and set a season record for fastest goal to start a game for the Roadrunners.

Tucson Roadrunners rookie forward Nate Sucese skates prior to Friday night’s clash with the San Diego Gulls in Irvine, California. Last weekend, Sucese was one of three rookies to score first for Tucson in each of their three games with the Colorado Eagles. Friday night, Sucese was one of three rookies to assist on each of the team’s three goals, along with Jan Jenik and Victor Soderstrom.