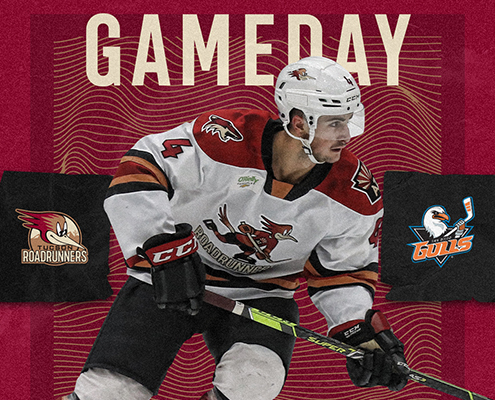 The Tucson Roadrunners conclude their season series with the San Diego Gulls Saturday night in Irvine, California. The Gulls defeated the Roadrunners by a score of 5-3 Friday night, in yet another high-scoring contest between the I-8 border rivals. Tucson will look to avenge that loss when they play the Gulls one final time Saturday night in Irvine.

Three Things
1) Special teams were once again at the forefront of Friday night’s contest between these two teams, as both teams went on five power-plays throughout the game. The Roadrunners were the only team to cash in on a man advantage, scoring on their third power-play of the first period. Tucson’s penalty-kill unit was as strong as ever, going a perfect five-for-five and shutting down the second-best power-play unit in the AHL Pacific Division.

2) The lone power-play goal of Friday night’s game belonged to Tucson Roadrunners forward Michael Carcone. Carcone found the back of the net on the man advantage in the first period for his team-leading 13th goal of the season, and his fifth power-play score, leading all active Roadrunners. Carcone now has seven goals in his last three games against San Diego, beginning with his four-goal performance on April 9 in Tucson.

3) When the Tucson Roadrunners hosted the Colorado Eagles for three games last weekend, the first Tucson goal in each game was scored by a rookie. On Friday night, each of the team’s three goals against San Diego was assisted by a rookie skater. Jan Jenik assisted on Tyler Steenbergen’s quick goal to open the scoring in the first period, followed by Victor Soderstrom lending a hand on Michael Carcone’s power-play score 12 minutes later in the first. Finally, Nate Sucese helped out on Jeremy Gregoire’s third goal of the season in the third period, picking up his sixth assist of the year, tied for Jan Jenik and Ryan McGregor for most among Roadrunners rookies.

What’s The Word?
Tucson Roadrunners forward Michael Carcone on the Roadrunners recent play and keys to success heading into Saturday’s matchup with the San Diego Gulls:

“We’re getting shots, we’re playing well, and playing well defensively. When you put those together, most nights you’ll come out with a win. We just need to keep doing the same thing.”

Number to Know
93 – The number of seconds into Friday night’s contest with the San Diego Gulls when Roadrunners forward Tyler Steenbergen put Tucson up 1-0 with his eighth goal of the season. The score set a season record for fastest Tucson goal to start a game, breaking Ryan McGregor’s previous mark of 2:12 into the first period on March 20, also against San Diego.