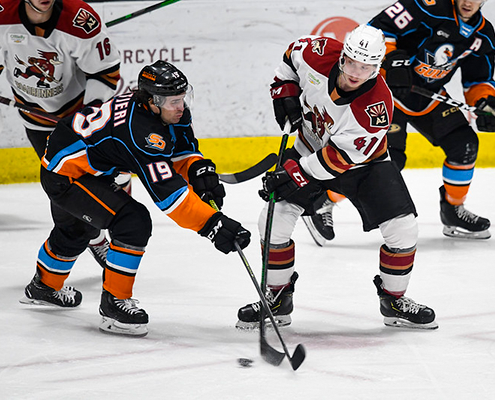 Irvine, California – The Tucson Roadrunners put on a show Saturday night against the San Diego Gulls. Tucson set a franchise record for most goals in a game with nine, evening the season series with the Gulls at four games apiece and retaining the I-8 Border Cup for another year. Ivan Prosvetov started in net for the Roadrunners, making 47 saves in the win, his career high.

The first period was all for the Roadrunners, even if it didn’t seem like it at first. The Roadrunners penalty-kill unit accomplished an impressive feat, holding the Gulls scoreless for 5:52 on consecutive time on the penalty-kill. Tucson committed three straight penalties before ever drawing a penalty of their own. After surviving the San Diego onslaught with the score still even at zero, the Roadrunners finally went on their first man advantage of the night, and made it count. Rookie Jan Jenik kept the first-year Roadrunners hot, cashing in on the power-play for his third goal of the season, and more importantly putting the Roadrunners up 1-0 late the period. As the first period drew to a close, the Roadrunners decided they weren’t content with taking a 1-0 lead into the first intermission, so they doubled it. With 26 seconds left in the opening frame, Tyler Steenbergen put Tucson up 2-0, slipping the puck between the pads of San Diego goaltender Olle Eriksson Ek after breaking away from his defender. The Roadrunners still weren’t done piling on the offense, as Josh Wilkins took a backhand pass from Michael Carcone to put the Roadrunners up 3-0 only 25 seconds into the middle frame. The goal set a season record for fastest goal to start a period, after the team set a new fastest time to open a game with a goal Friday night. With the goal, Wilkins and Carcone each recorded multiple point nights with a goal and an assist apiece. Carcone picked up his third point of the night, an assist, when Barrett Hayton tipped his shot to make the score 4-0. 45 seconds later, and only 5:17 into the second period, the score stood at 5-0 for the Roadrunners, thanks to defenseman Cameron Crotty scoring his first professional goal. The Roadrunners had to wait 5:23 for their next goal (the longest time in between goals all night), when Josh Wilkins netted his second goal of the year to make the score 6-0. San Diego’s nightmare second period was far from over, as Kevin Hancock scored his third goal of the season only 1:31 later to put the Roadrunners up by a touchdown, 7-0. Tucson ended up with five goals in the second period alone, averaging a score nearly every three minutes since Jan Jenik opened the scoring with 2:57 left in the first period until the end of the second period. At the conclusion of the middle period, the Roadrunners were still leading 7-0, with 20 minutes separating them and the retention of the I-8 Border Cup for another season. The shutout bid for Roadrunners goaltender Ivan Prosvetov ended 33 seconds into the third period, as San Diego netted their first goal of the night on their 33rd shot on goal. The Gulls made the score 7-2 three and a half minutes later, with Alex Limoges recording both of San Diego’s goals to open the third period. Tucson responded with another goal of their own, Jan Jenik’s second of the night with both coming on Tucson power-plays. The goal gave Tucson their third power-play goal of the night, their best mark all season. Tucson regained their seven-goal lead, making team history in the process when Kevin Roy put the Roadrunners up 9-2. Saturday marked the first time in franchise history where Tucson scored nine goals in a game. The score was still 9-2 as time ran out, earning the Roadrunner their most impressive win of the season, and securing the I-8 Border Cup for one more season.

The Roadrunners continue their final road trip of the season, heading to Texas to take on the Stars beginning Thursday, May 6, at 5:00 p.m. MST/7:00 p.m. CDT, at the H-E-B Center. You can listen to the game in Tucson on FOX Sports 1450 AM and on the iHeart Radio app or watch the game on AHL TV.

“I thought the guys did an excellent job of bringing their thoughts back to the center of the team. They have put in a lot of hard work and played a lot of great games over the past few months. It was definitely nice to see them get rewarded with this type of win.”

Tucson Roadrunners Head Coach Steve Potvin after the game described what Saturday night’s decisive 9-2 win over the San Diego Gulls meant to him and the rest of the team.

PILING ON THE POINTS – The Tucson Roadrunners matched their franchise record for most goals in a single period Saturday night against the San Diego Gulls with a five-goal second period. Friday marked the second time this season where Tucson recorded five goals in a period, with the last time coming on March 20 against none other than the San Diego Gulls. In addition, the Roadrunners set a franchise record for most goals in a game with nine, breaking the previous record of eight goals in a game.

Watch the ninth Tucson Roadrunners goal of Saturday night’s game, scored by Kevin Roy, setting a franchise record for most goals in a game. The goal came in the third period, and was the last goal scored by either team Saturday night.

Tucson Roadrunners forward Josh Wilkins celebrates after scoring a goal in Saturday night’s victory over the San Diego Gulls. Wilkins had a pair of goals and an assist on three shots, with a plus-minus rating of +2. Both of Wilkins’ goals were assisted by Michael Carcone.

Tucson Roadrunners Road Ahead: Week of May 3, 2021
Scroll to top