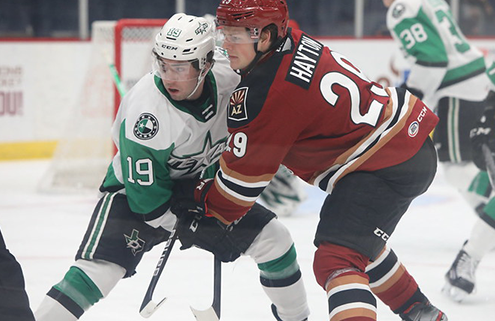 Tucson Roadrunners Road Ahead: Week of May 3, 2021

Who’s On The Schedule
The Tucson Roadrunners will embark on their final road trip of the 2021 AHL campaign, traveling to Texas to take on the Stars in a three-game set. The Stars enter the series on a three-game point streak, having gone 2-0-1-0 against the Cleveland Monsters last weekend in Cedar Park. The Stars are 7-8-2-0 against AHL Pacific Division squads, including a sweep of the Roadrunners in Tucson to open the month of March. They sit at fifth in the AHL Central Division with a 14-15-3-0 overall record.

A Historic Outing Saturday Night
Saturday’s 9-2 Roadrunners victory over the San Diego Gulls was a historic night for several reasons. Most notably of which being a franchise record for most goals scored in a game. While recording his first multi-goal night of the season, forward Josh Wilkins set a season record for fastest goal to start a period, when he put the Roadrunners up 3-0 only 25 seconds into the second period. The previous night, Tyler Steenbergen set a record for fastest goal to start a game, when he put the Roadrunners up 1-0 1:33 into the contest. Saturday’s win tied a season record for most goals in a period (five) and most power-play goals in a game (three), with both records being previously set against the San Diego Gulls.

Firing On All Cylinders
Along with the stellar offensive attack in Saturday’s win, the defensive side of Tucson’s game was just as impressive. Starting goaltender Ivan Prosvetov set a season high for most saves in a single period (19) as well as for an entire game (47), allowing two goals or less in his third start out of his last five with Tucson. Prosvetov now has a 3-2 record in his last five games, only allowing more than three goals once. Tucson’s penalty-kill was as strong as ever, stopping all four of San Diego’s chances on the man advantage, including nearly six straight minutes of the Gulls being on the power-play early on in the first period.

Did You Know?
Out of the nine goals in Saturday night’s high-scoring affair, only one was scored by a Tucson defenseman. Rookie defenseman Cameron Crotty scored his first career professional goal in the second period of the game, making the score 5-0 only 45 seconds after Barrett Hayton cashed in on the power-play to put the Roadrunners up by four. Roadrunners rookies accounted for nine total points in Saturday’s contest, including three goals.

For The Fans
Tickets are now on sale for the final two games of the 2021 AHL Regular Season, a pair of games with the Ontario Reign at the Tucson Arena. As part of Fan Appreciation Weekend, Friday night will be the third and final El Lazo de Tucson game, and Sunday will be a special Kachina Sunday game that will be televised live in Southern Arizona on The CW Tucson. The arena capacity will be increased to 1,550 for these final two games, with tickets available at TucsonRoadrunners.com/WelcomeBack.

Around The Pacific Division
While the Roadrunners are busy tangling with Texas of the AHL Central Division, the rest of the AHL Pacific Division will be relatively quiet. After hosting the Bakersfield Condors on Monday, the only other game for the San Jose Barracuda this week will be against the Henderson Silver Knights on Saturday. Bakersfield and the San Diego Gulls will be engaged in a battle of birds Friday and Saturday, while the Colorado Eagles visit the Ontario Reign in El Segundo. With the 2021 AHL season winding down, the Henderson Silver Knights hold a slight advantage over the Bakersfield Condors for the top of the division standings. Henderson has a three-point lead over the Condors with one more game played overall.