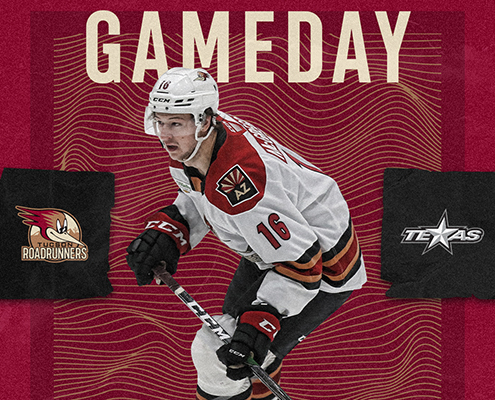 The Tucson Roadrunners travel to Cedar Park this weekend for a three-game set with the Texas Stars. Game one of the series is this evening at 5:00 p.m. MST. The Stars visited the Roadrunners at the Tucson Arena earlier this season, for the team’s first three games in the month of March. The series marks the final road trip of the season for Tucson, and with the Stars allowing fans into their arena, the remaining five games on the schedule will all have fans in attendance.

Three Things
1) The Roadrunners head to the state of Texas for the first time since December 14, 2019. Their last game at the H-E-B Center was a 3-1 win over the Stars in which current Roadrunner Jeremy Gregoire had a goal, and Cam Dineen, Michael Bunting, Lane Pederson, and Kyle Capobianco all recorded assists. Goaltender Adin Hill stopped 21 of 22 shots, while Ivan Prosvetov served as backup. The Stars earned five of six possible points against the Cleveland Monsters last weekend in Cedar Park and sit at fifth in the AHL Central Division with six games left on their schedule.

2) Tucson’s dominant 9-2 win over the San Diego Gulls last Saturday will be remembered as a highlight of the team’s fifth anniversary season for a number of reasons. The game set a Roadrunners franchise record for most goals in a game, while setting several season-highs, including power-play goals, most saves in a game, most goals in a period, and fastest goal to start a period. In the words of Head Coach Steve Potvin, “the guys did an excellent job of bringing their thoughts back to the center of the team, and it was definitely nice to see them get rewarded with that type of win.”

3) Special teams were an integral part of Saturday’s 9-2 Roadrunners win. In the first period alone, the Roadrunners killed off three consecutive penalties to keep the score tied at zero early on. After the 5:52 straight time of San Diego being on the power-play, Tucson fired back with a power-play goal of their own to go up 1-0. The Roadrunners never looked back, scoring two more times on the man advantage, and fending off an additional San Diego power-play late in the game to finish three-for-four on the power-play and a perfect four-for-four on the penalty-kill.

What’s The Word?
Tucson Roadrunners forward Brayden Burke on the upcoming three-game series with the Texas Stars, the final road trip of the season:

“We’ve only got five games left, so we’re going to try to get as many points as we can going into the playoffs situation here. The team’s feeling good and it’s a big weekend.”

Number to Know
14 – The number of different Roadrunners players to record a point in Saturday night’s historic 9-2 victory over the San Diego Gulls. Half of which recorded multiple points, led by Michael Carcone with four assists. The win secured an even 4-4 record with San Diego this season, securing the I-8 Border Cup’s spot in Tucson for a third-straight year.

We’re Doing It Live
Roadrunners Hockey returns to the radio today at 5:00 p.m. as “Voice of the Roadrunners” Adrian Denny brings you all of the action on Fox Sports 1450 AM. All Roadrunners games are broadcast live on Tucson’s Sports Station, along with AHLtv.