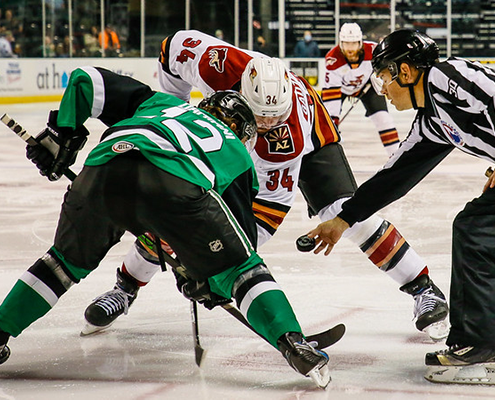 Cedar Park, Texas – The Tucson Roadrunners traveled to Cedar Park to take on the Texas Stars at the H-E-B Center Thursday night. Defensive pair Jalen Smereck and Jordan Schmaltz each scored goals for the Roadrunners but fell to the Stars by a score of 7-2. Frederik Gauthier and Cam Dineen returned to the lineup Thursday night, and Ivan Prosvetov once again started in net for Tucson.

The Stars jumped out to an early 1-0 lead, when a deflected puck made its way to the back of the net less than a minute into the contest. Tucson answered back with a goal of their own midway through the period, when defenseman Jalen Smereck unleashed a slapshot from the blue line, tying the game at one. Texas retook the lead less than four minutes later, when Cole Schneider scored his ninth of the season to make the score 2-1. The Stars extended their lead as the first period drew to a close, when Anthony Louis became the second Stars player to record in ninth goal of the season in Thursday’s contest. Despite the 3-1 deficit at the end of the first period, the Roadrunners were narrowly outshooting Texas 11-10, and had killed off the only penalty of the opening frame. Tucson pulled to within one 2:32 into the middle period, when Jordan Schmaltz cashed in for his second goal of the season. Tucson brought the puck into the offensive zone with some picture-perfect passing, and Schmaltz was the one to finish the job. Both teams continued to battle, and the Stars struck again near the midway point of the second period. The puck found its way to the back of the net after a series of bounces, putting the Stars up by two, with Max Martin credited with his first goal of the season. The score stood at 4-2 and would remain that way as time expired in the second period. Shots were at an even 18 apiece heading into the third period, with the Roadrunners looking to battle back. The Roadrunners went on an early penalty, as Doyle Somerby took a penalty for roughing. Just seconds after the penalty had expired, the Stars put one past Tucson goaltender Ivan Prosvetov to make the score 5-2. Texas tacked on another goal when Adam Mascherin scored his 16th of the season, the second-most in the American Hockey League. Texas added their seventh goal to the stat sheet with less than three minutes to go in regulation, as the final score wound up as 7-2.

The Roadrunners take a day to practice on Friday before continuing their final road trip of the season Saturday and Sunday against the Texas Stars. Saturday’s matchup is scheduled for 5:00 p.m. MST/7:00 p.m. CDT, at the H-E-B Center. You can listen to the game in Tucson on FOX Sports 1450 AM and on the iHeart Radio app or watch the game on AHL TV.

“It was not the Roadrunner way tonight. Our one bright spot was seeing Cam Dineen back in the lineup. The amount of hard work Cam and our staff have dedicated to his return got him back in top form, and we’re really happy to have him back.”

Tucson Roadrunners Head Coach Steve Potvin after the game on defenseman Cam Dineen returning to the lineup for the first time since March 26.

DON’T OVERLOOK IT
A POTENT D-PAIR – The Tucson Roadrunners two goals Thursday night were scored by the defensive pairing of #55 Jalen Smereck and #56 Jordan Schmaltz. Smereck now has a point in four of his last five games, and his first goal of the season after his first period slapshot against Texas Thursday night. Schmaltz, meanwhile, is now on a two-game point streak, and has his second goal of the season, both of which coming on the road.

Watch Tucson Roadrunners defenseman Jordan Schmaltz finish a perfect passing exchange from his teammates to find the back of the net in the second period against the Texas Stars Thursday night in Cedar Park. The goal was Jordan’s second of the season, both of which have come on the road. Schmaltz begins his first multi-game point streak of the season with his performance Thursday night.

Tucson Roadrunners rookie forward Nate Sucese looks up the ice in Thursday night’s contest with the Texas Stars. Sucese notched an assist on Jordan Schmaltz’ goal in the second period, and now has a point in four of his last five games. Sucese leads all Roadrunners rookies in goals with six and leads the team overall in shorthanded goals with two.