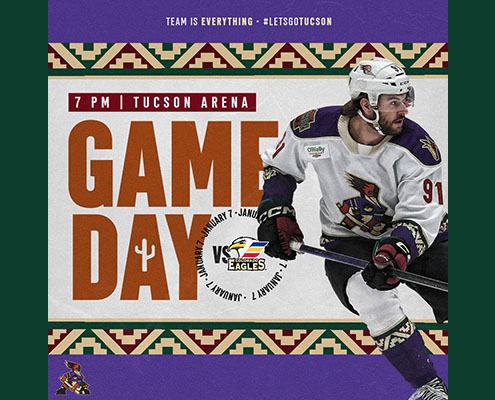 2) Tucson defenseman Victor Soderstrom recorded his 15th assist of the season in Friday’s series opener against Colorado, moving him into a tie with Laurent Dauphin for second on the active Roadrunners roster in assists. The current team lead belongs to fellow defenseman Cam Dineen, who is tied for fourth in the American Hockey League in assists by a blue-liner with 20. The Roadrunners are one of four teams in the AHL to have two defensemen with at least 15 assists on the season (Bridgeport, Coachella Valley, Rockford). Soderstrom has notched four points over his last five outings (1g 3a), as well as six points over the last six home games for the 21-year-old.

3) The Roadrunners had several big names back in the lineup for Friday night’s series opener, including forwards Laurent Dauphin, Adam Cracknell, and Travis Barron. Dauphin and Cracknell are both in the top-five on the team for total points, while Barron leads Tucson in fights this season with five. Dauphin paced the Roadrunners in shots on goal Friday night with six in his first game back after a pair of NHL outings with the Arizona Coyotes. Cracknell was back on the ice for the first time since December 18, his final game in the month of December that saw the Roadrunners Captain record 11 points (5g 6a) in six appearances. Meanwhile, Barron was back in the lineup to take on his former team, as the 24-year-old was drafted by the Colorado Avalanche in 2016 (Round 7, #191 Overall).

“It’s a good division, every team is good. You’re never going to get an easy game here. [Colorado] is a good team, but we’re a great team too. We just have to pick it back up and be ready for [Saturday].”

Roadrunners forward Ryan McGregor on the strength of the ten-team AHL Pacific Division, as six of the ten squads possess a winning record and four of the AHL’s top-nine teams are from the Pacific.

Number to Know
8 – The number of AHL Pacific Division rivals the Roadrunners have faced so far this season after Friday’s series opener against the Colorado Eagles. Tucson will take on all nine of their divisional opponents, as the Abbotsford Canucks will visit the Old Pueblo on January 28 and 29 as the only team the Roadrunners have not yet faced.  Tucson is one of five teams that are still a member of the Pacific Division in the same form as when the Roadrunners joined the American Hockey League in 2016 (Bakersfield, Ontario, San Diego, San Jose).