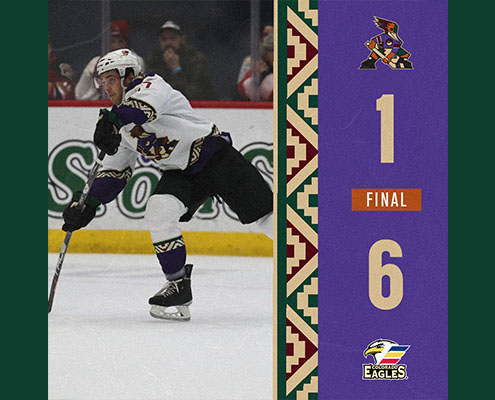 ROADRUNNERS CLOSE OUT WEEKEND SERIES AGAINST COLORADO WITH 6-1 LOSS

Tucson, Arizona – The Roadrunners wrapped up a two-game set against the Colorado Eagles Saturday night with a 6-1 loss to the AHL affiliate of the Colorado Avalanche. The visiting Eagles took a total of eight trips to the man-advantage Saturday, but the Roadrunners penalty-kill finished the night seven-for-eight to allow just one power-play goal over the weekend series. Goaltender Jon Gillies made the start in net for Tucson with 32 total saves, including a perfect 15-for-15 mark in the second period. The Roadrunners will continue their four-game home stand with the first of two meetings against the Milwaukee Admirals on Tuesday, January 10, at 6 :30 p.m. MST.

Roadrunners forward Travis Barron found the back of the net in the third period of Saturday’s matchup with the Colorado Eagles for his sixth goal of the season. The 24-year-old has two points (1g 1a) and has been a plus-two player over his last three outings dating back to December 22 against San Diego. Barron is third on the Roadrunners roster with a plus-seven overall on the year, which leads Tucson forwards.

REMEMBER ME – Tucson Roadrunners forward Travis Barron lit the lamp against his former team Saturday night, as his sixth goal of the season came in the third period against the Colorado Eagles. The 24-year-old was drafted by the Colorado Avalanche in 2016 and became the fourth Roadrunners skater to record a point against their former Pacific Division team this season. In just two games, Adam Cracknell notched a goal and two assists, while Cam Hebig tallied a goal against their former team: the Bakersfield Condors. In addition, Boko Imama recorded an assist in Tucson’s first meeting this year against the Ontario Reign on November 26.

Saturday night marked the return of the Roadrunners fan-favorite Whiskey and Wings event, which was held at the Tucson Arena prior to the Roadrunners series finale with the Colorado Eagles. Among those who participated in Whiskey and Wings were: Trident Grill, Union Public House, Charly’s Bar and Grill, ATL Wings, Horseshoe Grill and Tucson Arena. The annual tradition takes place on the first Saturday Roadrunners home game of the new year. The event, as well as Friday’s Yoga On Ice session, helped kick off a loaded month of January that features ten total home games.

“That’s a positive we can take out of this weekend… We didn’t give [Colorado] much. We stayed tight, we stayed compact, and took away their scoring threats.”

Roadrunners defenseman Dysin Mayo on Tucson’s penalty-kill performance over the weekend series with the Colorado Eagles. Mayo, along with Cam Dineen and Laurent Dauphin, held Colorado scoreless for an entire five-on-three situation that lasted two minutes in the second period.

The Eagles opened the scoring early in Saturday’s series finale, as they took a 1-0 lead 1:26 into the first period. Colorado continued by netting the first power-play goal of the weekend on their first trip to the man-advantage Saturday for a 2-0 lead in the first five minutes of play. The Eagles and forward Jean-Luc Foudy found the back of the net again with 1:44 remaining in the opening frame, as Foudy’s second goal of the period made it a 3-0 game at the first intermission. After the first period matched the total number of goals from Friday’s series opener with three, the middle frame of action marked the first scoreless period of the weekend. A highlight of the second period was Tucson’s penalty-kill getting back on track after the early Colorado power-play goal, as the Roadrunners shut down the Eagles for a two-minute five-on-three situation and were a perfect five-for-five in the period overall. The entire two minutes of being down two players was handled by Laurent Dauphin, Dysin Mayo and Cam Dineen to keep the score at 3-0 entering the third period of play. With Colorado still up by three in the second half of the third period, the Eagles ended a streak of nearly 34 minutes without a goal with their fourth score of the contest. The Roadrunners had a quick answer, as Travis Barron put Tucson on the board with his sixth goal of the season just 23 seconds later to make it a 4-1 game. The Eagles responded exactly three minutes after Barron’s tally with another goal of their own, pushing their lead back out to 5-1. The Roadrunners drew their fourth trip to the man-advantage of the contest late in regulation and opted to pull netminder Jon Gillies for a six-on-four opportunity. The Eagles shut down the attempt, and an empty-net strike by former Arizona Coyotes forward Alex Galyenchuk with 11 seconds left closed out the weekend series from the Tucson Arena.

Tucson Roadrunners Road Ahead: Midweek With Milwaukee
Scroll to top