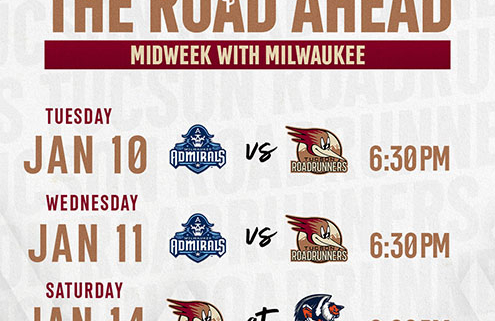 Following the midweek series with Milwaukee, Tucson will head on the road for three games against three different teams in Bakersfield, Coachella Valley and Henderson. The Roadrunners will then return to the desert for a six-game home stand over ten days, which is tied for the longest consecutive stretch of home contests this season. The extended home stand kicks off with the first El Lazo de Tucson night of the season on Friday, January 20, followed by Harry Potter night on Saturday, January 21. The next weekend features the fan-favorite Star Wars Night on Saturday, January 28, and Arizona Coyotes Day the following afternoon on Sunday, January 29. For the full promotions schedule and to purchase tickets, visit TucsonRoadrunners.com/Fun.

The Arizona Coyotes announced on Saturday that forward Mike Carcone had been assigned to the Tucson Roadrunners. Carcone scored a pair of goals and was a plus-three player in six games with Arizona and returns to the Roadrunners as the leading scorer in the American Hockey League with 16 goals and 26 assists for 42 total points in just 27 outings. The 26-year-old was named the AHL’s Player of the Month for December 2022, as he averaged two points per-game with 10 goals and 10 assists in as many appearances. Carcone was the first Roadrunner to ever earn Player of the Month honors and was the second Tucson skater to win a monthly award in the 2022 calendar year, after Matias Maccelli was named the AHL’s Rookie of the Month for February 2022.

Tucson netminders Ivan Prosvetov and Jon Gillies combined for 57 total saves over the weekend set against Colorado. Prosvetov stopped 25 of 27 shots faced in Friday’s series opener, marking the ninth time this season the 23-year-old has allowed two goals or less and the 12th time with three or less goals against. After his strong performance Friday, Prosvetov was recalled by the Arizona Coyotes on Sunday for his first NHL call-up of the season with Connor Ingram unavailable for Sunday night’s game against Pittsburgh due to illness. Meanwhile, Gillies’ 32 saves on Saturday matched his second-most in a start this season, which he last achieved on December 3 in San Jose. The 28-year-old has recorded at least 25 saves in three-straight outings, and in six of his last eight appearances overall.

Roadrunners Forward Travis Barron lit the lamp in Saturday’s series finale against the Colorado Eagles, becoming the fourth Tucson skater to record a point against their former team this season. Barron joined Adam Cracknell, Cam Hebig and Boko Imama, as Cracknell (1g 2a) and Hebig (1g) each found the back of the net against the Bakersfield Condors in October, while Imama notched an assist against the Ontario Reign in November. Forward Laurent Dauphin has a chance to face-off against his former team this week, as he was a member of the Milwaukee Admirals for parts of two seasons from 2019 to 2020. Defenseman Devante Stephens also has a chance to go against his old team in the Abbotsford Canucks this month, as they’ll be at the Tucson Arena January 28 and 29.

Proud Of Our Penalty-Kill

A highlight of Tucson’s weekend series with the Colorado Eagles was their penalty-kill unit that finished the weekend 11-for-12 overall. The performance included fending off a five-on-three attack by Colorado that lasted a full two minutes, as well as a perfect four-for-four mark in Friday’s series opener. The full five-on-three kill was executed by Laurent Dauphin, Cam Dineen, and Dysin Mayo, who remained on in the Tucson zone for the entire two-minute situation. The Roadrunners fended off an additional 48 seconds of five-on-three later on in the same period.

Roadrunners defenseman Victor Soderstrom has found success while at the Tucson Arena this season, as the 21-year-old has tallied six points (1g 5a) over his last seven home games. Soderstrom reached 15 total assists on the season in Friday’s series opener against Colorado, making Tucson the fourth team in the AHL to have two defensemen with at least 15 assists this year (Bridgeport, Coachella Valley, Rockford). Soderstrom is second to Cam Dineen, who leads Roadrunners blue-liners with 20 total assists.

With his appearance in Friday’s series opener against the Colorado Eagles, Roadrunners defenseman Dysin Mayo set a new Tucson franchise record for total games played with 261. The 26-year-old is the only player to have appeared in all seven seasons for the Roadrunners since their inaugural 2016-2017 campaign. In the same game, Mayo’s defensive partner Cam Dineen took sole possession for fourth place all-time in total games played and is three appearances away from third place entering the week.

Tucson Roadrunners Happy Hour airs every Tuesday at 5 p.m. on FOX Sports 1450AM and the iHeartRadio app, with a podcast version also available after each episode on the iHeartRadio app. This week, Adrian Denny, Brett Fera and Kim Cota-Robles will be joined by Roadrunners Captain Adam Cracknell in a special extended Pregame Edition before Tucson takes on the Milwaukee Admirals at 6:30 p.m. In addition, a new episode of the Tucson Roadrunners Insider Podcast released late Saturday night, as “Voice of the Roadrunners” Adrian Denny and TucsonRoadrunners.com’s Jimmy Peebles heard from defensive partners Dysin Mayo and Cam Dineen and looked ahead to the upcoming series against Milwaukee. The podcast can be found on the iHeartRadio App.