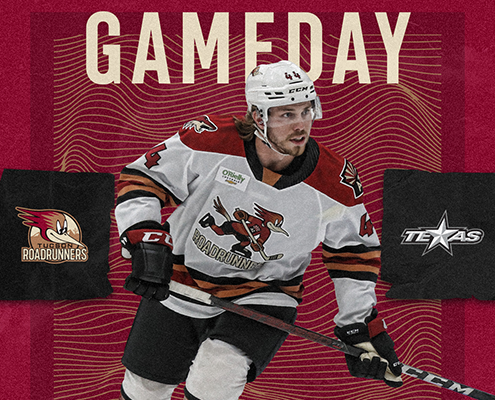 The Tucson Roadrunners continue their final road trip of the season on Saturday, when they return to the H-E-B Center for a rematch with the Texas Stars. Tucson will be looking to avenge Thursday night’s 7-2 loss, and even up the series in Cedar Park in the process.

Three Things
1) Opening the scoring for the Roadrunners Thursday night was veteran defenseman Jalen Smereck, with a blast from the blue line to even the score at one midway through the first period. The goal was Smereck’s first of the season, and extended his active point streak to three games, with points in four of his last five appearances. Smereck also matched his career season-high for points with the goal, after notching his first multi-point performance of the season a week ago against the San Diego Gulls in Irvine, California.

2) The second goal for Tucson in the series opener with Texas belonged to Smereck’s defensive partner, Jordan Schmaltz. The Roadrunners entered the offensive zone with a picture-perfect passing attack, before Schmaltz uncorked a shot that lit the lamp, and brought the Roadrunners to within one of the Stars. The goal put Schmaltz on a two-game point streak, after he tallied an assist and season-high six shots on goal in Saturday’s victory over the San Diego Gulls. Schmaltz is no stranger to hockey in the Lone Star State, as he was a member of the San Antonio Rampage from 2017 to 2019, recording 32 points over 67 games with the Rampage.

3) According to Roadrunners Head Coach Steve Potvin, the bright spot from Thursday night’s loss was the return of defenseman Cam Dineen to the Tucson lineup. Dineen had been out with injury since March 26 but started Thursday’s game out on the ice alongside defensive partner Dysin Mayo. Dineen was on pace to set a new career high in points for a season, recording points in three of the first four games of the season, including a game-winning goal in the season opener. Another familiar face returning to the lineup on Thursday was forward Frederik Gauthier, assigned to Tucson by the Arizona Coyotes on Wednesday. Gauthier has been dominant on face-offs this season for the Roadrunners and recorded his first multi-point game of the season April 18 against Henderson, when he tallied a goal and an assist.

What’s The Word?
Tucson Roadrunners forward Ryan McGregor on leading all Roadrunners rookies in assists with 11, and contributing to the team while on a four-game point streak:

“I’m just trying to help the team however I can, and if that’s getting some assists, I’m happy to do. I think our team just has to get back to it next game.”

Number to Know
4 – The number of games remaining for the Tucson Roadrunners in the 2021 AHL Regular Season, before the Pacific Division engages in a divisional playoff beginning Tuesday, May 18. All seven teams are guaranteed a spot in the playoffs, with the top three teams automatically in the second round, consisting of two best-of-three series. The remaining four teams start off with a single-elimination play-in round, taking place at the FivePoint Arena in Irvine, California, with only one team advancing to the second round.

We’re Doing It Live
Roadrunners Hockey returns to the radio today at 4:45 p.m. for Roadrunners Warm-Up, as “Voice of the Roadrunners” Adrian Denny brings you all of the action on Fox Sports 1450 AM. All Roadrunners games are broadcast live on Tucson’s Sports Station, along with AHLtv.