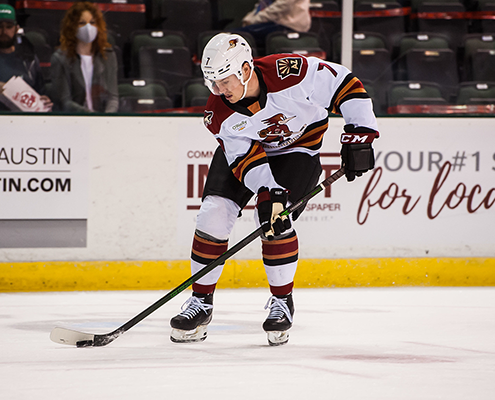 Cedar Park, Texas – Any bad taste that was left in the mouths of the Tucson Roadrunners after Thursday night’s loss was likely washed out with their 5-2 win in the second game of the series Saturday night. The team was in sync early on, scoring five times in the first 35 minutes of action, with ten players recording points and four recording multiple points. Ivan Prosvetov was solid in net for the Roadrunners, making 27 saves and picking up the win.

The Stars continued their reputation of scoring early in hockey games, when they cashed in on their first power-play of the night to pull ahead 1-0 only 4:31 into the first period. The goal let defenseman Jordan Schmaltz out of the box early, after he took a roughing penalty for the first infraction of the night. Not long after the opening goal by the Stars, the Roadrunners tied the game up at one with a goal by Michael Carcone, his team-leading 14th of the year. Carcone deked his defender, then slipped a backhand shot past Stars goaltender Adam Scheel for the equalizer. Both assists on the goal were notable, as rookie forward Ryan McGregor extended his active point streak to five games, and Ben McCartney picked up his first professional point in his Roadrunners debut. Nearly ten minutes after the tying goal, Tucson took their first lead of the series as Jalen Smereck took the puck from a face-off win and put it in the back of the net, extending his point streak to three games and putting the Roadrunners up 2-1. Less than a minute and a half later, another Roadrunners defenseman lit the lamp. Ty Emberson cashed in for his first professional goal, extending the Tucson lead to 3-1. Ryan McGregor assisted on the goal, earning him a multi-point night after only 20 minutes of play. The first action of the middle period came 6:45 of the way in, when Jeremy Gregoire and Jarad Rosburg got into it behind the Stars net, earning each five minutes in the box for fighting. Tyler Steenbergen joined Gregoire in the box shortly after for a tripping penalty, but the Roadrunners killed off the penalty and remained up by two goals. Tucson extended their lead to 4-1 on a power-play of their own later on in the period, when Michael Carcone had a laser of a one-timer for his second goal of the night. The Roadrunners weren’t done in the middle frame just yet, and neither was Ben McCartney after his assist in the first. McCartney notched his first professional goal 31 seconds after Carcone’s score to make the Roadrunners lead 5-1. With the goal, McCartney had his first professional multi-point game in his first-ever game above the WHL level. The score stood at 5-1 for the following 25:32, until the Stars scored their second power-play goal of the night on a five-on-three advantage. Fortunately for Tucson, that goal came with 20 seconds left in the game, and the Roadrunners came away with a 5-2 victory in the Lone Star State.

The Roadrunners will take on the Stars for the final time this season in a Mother’s Day rubber match taking place Sunday afternoon at 3:00 p.m. MST, 5:00 p.m. CDT, at the H-E-B Center. You can listen to the game in Tucson on FOX Sports 1450 AM and on the iHeart Radio app or watch the game on AHL TV.

“Great response tonight. It started with the will to compete from both within the game and during the game. It was great to see our youth contribute offensively. What impresses us the most is their will to play in hard areas in key moments. Everyone played a major role in the win tonight.”

Tucson Roadrunners Head Coach Steve Potvin after the game on what he saw from his players in Saturday night’s 5-2 victory over the Texas Stars on the road.

DON’T OVERLOOK IT
MULTIPLE POINTS ACROSS THE BOARD – The Tucson Roadrunners had four different skaters record multiple points in Saturday’s 5-2 win over the Texas Stars. Ryan McGregor was the first to accomplish the feat, when he assisted on two goals in the first period. Michael Carcone was next, scoring his second goal of the game on a power-play in the second period. Ben McCartney was next, scoring his first professional goal 31 seconds later to earn his second point of the night, and first professional multi-point game. Also reaching the multiple-point mark on McCartney’s goal was Jeremy Gregoire, as he picked up his second assist of the night.

Watch the newest member of the Tucson Roadrunners, Ben McCartney, score his first professional goal in the second period of Saturday night’s win, giving the Roadrunners a 5-1 lead. The goal was McCartney’s second point of the night, after he assisted on a Michael Carcone goal in the first period to tie the game at one. McCartney is fresh off his fifth season in the WHL with the Brandon Wheat Kings, where he finished second in the league for scoring.

Tucson Roadrunners defenseman Jalen Smereck looks up the ice during Saturday night’s matchup with the Texas Stars in the Lone Star State. Smereck scored his second goal in as many nights to give the Roadrunners a 2-1 lead late in the first period, extending his active point streak to three games. Smereck now has points in five of his last six appearances with the Roadrunners.