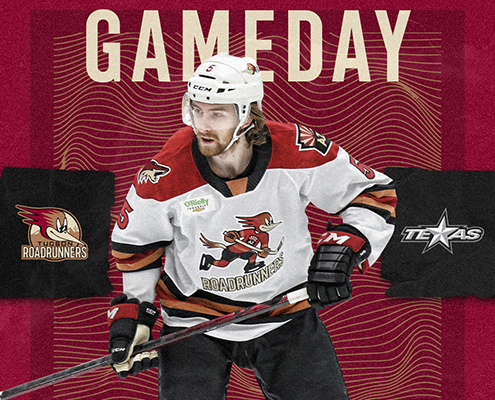 The Tucson Roadrunners wrap up their final road series of the season with a Sunday afternoon Mother’s Day matinee, the rubber match with the Texas Stars at 3:00 p.m. MST. After suffering a tough loss on Thursday in the season opener, Tucson bounced back and grabbed a dominant 5-2 win in the second game of the series on Saturday. Sunday marks the sixth and final time these two teams will face each other this season.

Three Things
1) Saturday night’s contest was a game of firsts for the Roadrunners, mostly within the first period of action. Tucson Forward Ben McCartney made his professional debut and picked up his first professional multi-point game in the process when he assisted on Michael Carcone’s equalizing goal early on in the first, then scored a goal of his own late in the second period. McCartney’s first pro goal wasn’t the first of the game for the Roadrunners, though. In the first period, defenseman Ty Emberson tallied his first pro goal, extending the Roadrunners lead to 3-1. McCartney and Emberson are two of the newest members of the Tucson roster, with McCartney fresh off a season with the Brandon Wheat Kings of the WHL, and Emberson arriving from the University of Wisconsin, where he served as captain in his junior season.

2) Aside from the various firsts, Saturday night was also a game for extending active point streaks. Rookie forward Ryan McGregor extended his point streak to five games with a pair of assists in the first period, then another assist in the second, marking the longest point streak by a first-year Roadrunners player this season. Saturday’s game was McGregor’s second three-point performance in the last three games, after he tallied three assists in a 9-2 rout of the San Diego Gulls on May 1. Jalen Smereck also extended his point streak to four games with his goal in the first period that gave the Roadrunners a 2-1 lead. Smereck has now recorded a point in five of his last six appearances for the Roadrunners.

3) Roadrunners goaltender Ivan Prosvetov picked up his ninth win in 16 games this season for the Tucson Roadrunners, surpassing his .519 win percentage from last season for the time being. Prosvetov made 27 saves and denied every even-strength chance the Stars threw at him Saturday night. Prosvetov has now allowed three goals or less in five of his last seven starts, and two goals or less in four of those contests. Prosvetov has started in 16 of the 19 games he’s dressed for this season and is now 7-0 in game two of a series after Saturday. Should he start today, he’s 4-0 on the second night of back-to-back starts. This season has had plenty of opportunities for Prosvetov to develop, as he was called up to the Arizona Coyotes in March and made his NHL debut with the club in the same month. Prosvetov has four wins since retunring to the Roadrunners on April 17.

“It was a sixty minute effort for sure, you see how fast the puck can end up in the back of the net, but our leadership group did a good job in the locker room making sure everybody stuck to the gameplan.”

Number to Know
4 – The number of different Roadrunners players to record multiple points in Saturday’s 5-2 win over the Texas Stars. Leading the way was rookie forward Ryan McGregor with his aforementioned three assists. Mike Carcone was the only player with two goals, one of which coming on the power-play midway through the second period. In his AHL debut, Ben McCartney notched a goal and an assist within the first two periods of action. Finally, Jeremy Gregoire tallied an assist on each of the two first career AHL goals for his teammates Ty Emberson and Ben McCartney.

We’re Doing It Live
Roadrunners Hockey returns to the radio today with Roadrunners Warm-Up at 2:45 p.m. MST as “Voice of the Roadrunners” Adrian Denny brings you all of the action on Fox Sports 1450 AM. All Roadrunners games are broadcast live on Tucson’s Sports Station, along with AHLtv.