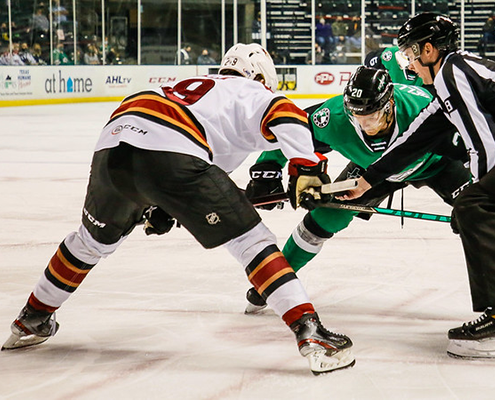 Cedar Park, Texas – Special teams proved to be pivotal in the series finale between the Tucson Roadrunners and Texas Stars, with three out of the four goals coming on the power-play, with the remaining goal being an empty-net score. The Roadrunners went on the power-play five times, scoring on one, while the Stars went on six different man advantages, scoring on two. Ivan Prosvetov started his third-straight game in the Lone Star State, stopping 23 shots on goal.

After an early barrage of scoring in the first two games of this series, Sunday’s game was a change of pace, with the first 18:34 being without a goal. Texas was the team to strike first, when Ben Gleason gave the Stars a 1-0 lead with one second left on the Texas power-play. The goal proved to be the lone goal of the final first period in the Lone Star State this season, and the teams headed off the ice with a 1-0 Texas lead on the scoreboard. The second period was more of the same, with the teams exchanging offensive zone opportunities back and forth across the ice. The Texas Stars penalty-kill unit was able to stifle the Roadrunners on both of their trips on the man advantage this period. Both goaltenders worked hard that period, not allowing a single goal, as the score stood at 1-0 as the teams headed into the final period of the weekend. The physicality felt in the first two games between these teams this weekend was as great as ever, with neither team willing to give in. After a late goal in the first and scoreless second period, the third period had the fastest goal to start a period all game, nearly halfway through. Barrett Hayton tapped in a rebound while on the power-play to score his fifth goal of the season and tie the game up at one. The Roadrunners had some tough going shortly after, drawing two quick penalties to face a five-on-three disadvantage. Texas was able to capitalize on the prime opportunity, retaking the lead by a score of 2-1. After this, the first three goals of the contest were all scored on the power-play.

The Roadrunners return home for the final two games of the 2021 AHL Regular Season, both against the Ontario Reign at the Tucson Arena. The first game will be Friday, May 14 at 7:00 p.m. MST, as the team celebrates their third and final “El Lazo de Tucson” night of the season. You can listen to the game in Tucson on FOX Sports 1450 AM and on the iHeart Radio app or watch the game on AHL TV.

“We wanted it bad. Penalties at the end of the game hurt us, the guys had fought back hard to that point.”

DON’T OVERLOOK IT
POWER-PLAY GOALS GALORE – Excluding the empty-net goal in the final minute of regulation, the remaining three goals in Sunday’s matchup between the Tucson Roadrunners and Texas Stars were all scored on the power-play. The Stars opened the scoring in the first, followed by a special-teams goal for each team midway through the third period.

Watch Tucson Roadrunners forward Barrett Hayton tap in a rebound for his fifth goal of the season, tying Sunday’s game at one 9:36 into the final period. The goal came on the power-play and was Hayton’s third score while on the man advantage this year.

Tucson Roadrunners forward Barrett Hayton fights for the puck behind the Texas net in Sunday’s matchup with the Stars. Hayton had his fifth goal of the season in the third period, temporarily tying the game at one. Hayton now has points in three of the last four games for the Roadrunners.

Tucson Roadrunners Road Ahead: Week of May 10, 2021
Scroll to top