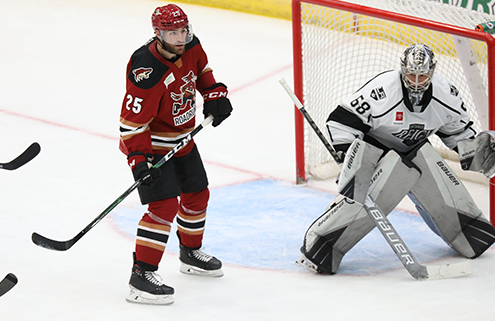 Who’s On The Schedule
The Tucson Roadrunners will return home to Southern Arizona for the final two games of the 2021 AHL Regular Season this week. The Roadrunners will be hosting the Ontario Reign at the Tucson Arena on Friday and Sunday, the seventh and eighth meetings between these two teams this season. If the Roadrunners win both games, with at least one in regulation, they’ll overtake Ontario in the standings in terms of winning percentage, altering the playoff matchups set to take place in the play-in round beginning Tuesday, May 18.

Returning To Tucson
A few familiar faces are returning to the Tucson roster after spending some time with the Arizona Coyotes of the NHL. Forward Jan Jenik, along with defensemen Kyle Capobianco and Victor Soderstrom have been assigned to Tucson by the Coyotes after their season drew to a close. In Friday night’s game against the San Jose Sharks at the SAP Center in San Jose, Jenik and Soderstrom each recorded their first career NHL goals, with Jenik even doing so in his NHL debut. In Saturday’s game, Jenik recorded his second NHL goal in as many games, as Soderstrom added an assist on the score. The two will have a chance to make an impact for the Roadrunners down the final stretch, being joined by Kyle Capobianco, who has 12 points in 18 games with Tucson already this season.

Gregoire Grabs A Milestone
Besides the solid 5-2 Tucson win on Saturday against the Texas Stars, the game was especially notable for Roadrunners forward Jeremy Gregoire. Gregoire notched his 100th career point in the AHL with his second assist of the game, coming on a Ben McCartney goal in the second period. Oddly enough, Gregoire’s 100th professional point came on the first professional goal of new teammate Ben McCartney, recently brought up to the Roadrunners after a strong season with the Brandon Wheat Kings of the WHL.

El Lazo Finale On Friday
As part of fan appreciation weekend, Friday night marks the third and final “El Lazo de Tucson” game of the season, as the team takes on the Ontario Reign. The game is set to start at 7:00 p.m. MST, and feature the usual El Lazo presentation and festivities, along with a live El Lazo Jersey Auction after the game. Further fan details will be coming during the week. Tucson mascot Dusty will once again take on his alter-ego of “El Polvo” for the duration of the game.

A Mystery Auction Opportunity
As part of Fan Appreciation and the final El Lazo game of the season, the Roadrunners are currently auctioning off El Lazo mystery pucks. The auction is already live, with more details available at //web.dashapp.io/auction/6095abacdea4cc347835ae1b.

Fan Appreciation And Season Finale Sunday
Sunday, May 16 marks the final Roadrunners game of the 2021 AHL Regular Season, beginning at 2 p.m. MST, and taking place at the Tucson Arena against the Ontario Reign. Everyone in attendance will receive a Fifth Anniversary team poster, with further prizes and giveaways throughout the game. Some of the potential prizes include a 50-inch TV, staycation packages at the JW Marriott Starr Pass, gift certificates to local restaurants and for Roadrunners merchandise, signed collectibles by the team and more. The game will also be televised live in Southern Arizona on The CW Tucson.

Welcoming Back More Fans
The Tucson Roadrunners and the Pima County Health Department are increasing the number of fans allowed inside the Tucson Arena for the team’s final two games of the regular season. Public Health Director, Dr. Theresa Cullen described the atmosphere at the Tucson Arena as, “totally safe, people are masked, people are socially distanced. It’s what we need to do to be able to expand the number of people that can come back into the arena. Our goal is to get the city back to where we were [prior to last year].” Tickets are available for both games this weekend with an increased capacity of 1,550 at TucsonRoadrunners.com/welcomeback.

We’re Back On Television
Sunday’s season finale will also be the last televised Tucson Roadrunners game of the 2021 season. “Voice of the Roadrunners” Adrian Denny will once again be joined by Alex Kinkopf of ArizonaCoyotes.com for the Sunday afternoon broadcast of Tucson Roadrunners hockey.

Around The Pacific Division
As the 2021 AHL Regular Season draws to a close, some key matchups have emerged in the final week of the season. The San Jose Barracuda will be the first team in the division to wrap up their season, as they take on the Henderson Silver Knights in Las Vegas on May 11. Henderson will then play host to the Bakersfield Condors, in a potential battle for the number one seed in the Pacific Division Playoffs and home ice advantage throughout the postseason. Meanwhile, the San Diego Gulls will travel to Loveland, Colorado to take on the Eagles in a three-game series.