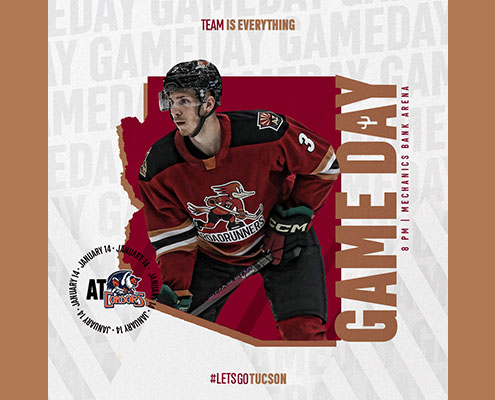 The Roadrunners head out on the road for three games in five nights against three different teams beginning Saturday night against the Bakersfield Condors. The standalone contest with the AHL affiliate of the Edmonton Oilers marks the third of eight total matchups between Tucson and Bakersfield this season. The Roadrunners enter the weekend having last played on Wednesday at home against Milwaukee, while Saturday represents the second night of a back-to-back for the Condors after a matchup in Coachella Valley against the Firebirds on Friday.

Three Things
1) Tucson took each of the first two meetings of the season with Bakersfield as part of the Roadrunners home opening weekend October 22 and 23. The Roadrunners outscored the Condors 10-6 over the two-game set with back-to-back 5-3 wins. Tucson lit the lamp in five of the six total periods of play, including three multi-goal frames. The series opener began with a goal by former Condor Adam Cracknell just 57 seconds into the contest, which was followed by a four-goal second period by the Roadrunners with three-straight power-play scores. Tucson jumped out to a 2-0 lead after the first period in the series finale the next night, and forward Laurent Dauphin capped off the series sweep with the first Roadrunners hat trick of the season.

2) The Roadrunners are coming off a home series against the Milwaukee Admirals that was highlighted by back-to-back multi-point performances from forwards Adam Cracknell and Mike Carcone. Carcone paced Tucson in scoring with six total points (2g 4a), as the two-game set with the Admirals marked his first games back with the Roadrunners since his call-up to the Arizona Coyotes on December 27. The 26-year-old extended his league lead for total points to 48 (18g 30a) with 29 games played, as well as his AHL lead for power-play goals to 11. Cracknell tallied consecutive multi-point outings for the first time since December 4 and 9, with five total points on the series against Milwaukee (3g 2a). The Roadrunners Captain scored back-to-back goals in the third period of Wednesday’s series finale, including a goal just 46 seconds into the frame.

3) Tucson and Bakersfield will face off four total times in the month of January, including the Condors final two games at the Tucson Arena this season on Friday, January 20 and Saturday, January 21. Saturday’s matchup at the Mechanics Bank Arena begins a stretch of three games over the next eight days between the Roadrunners and Condors, as Tucson will kick off a six-game home stand with their series opener against Bakersfield. The Roadrunners then continue at home with the first matchups of the season against the Chicago Wolves and Abbotsford Canucks, before heading back out on the road for the seven-game Gem Show Road Trip that begins back in Bakersfield against the Condors on January 31. Following their four meetings in January, the Roadrunners won’t go against the Condors until their final two matchups of the season on March 31 and April 1 in Bakersfield.

“We have a big road trip coming up against some really good teams, it’s not going to get any easier. We don’t need to score to have a good start, we just need to play well and find our rhythm.”

Number to Know
4 – The number of power-play goals scored by the Roadrunners over their back-to-back 5-3 wins over the Condors in October at the Tucson Arena. Each goal on the man-advantage was scored by a different Roadrunners skater: Laurent Dauphin, Cam Dineen, Mike Carcone and J.S. Dea. Carcone factored into all four power-play strikes with his goal and three assists, while Dauphin, Dineen, and Dea each notched an additional power-play assist to go with their goals. Dineen enters the weekend tied for second in the American Hockey League for power-play assists with 16, while Carcone leads the AHL in total power-play points with 25.

We’re Doing It Live
Tonight’s game will be broadcast live on AHLtv, as well as on the radio at FOX Sports 1450AM and the iHeartRadio app. Coverage begins at 7:45 with Roadrunners Warm-Up hosted by Jimmy Peebles, before “Voice of the Roadrunners” Adrian Denny has all the action from the Mechanics Bank Arena.