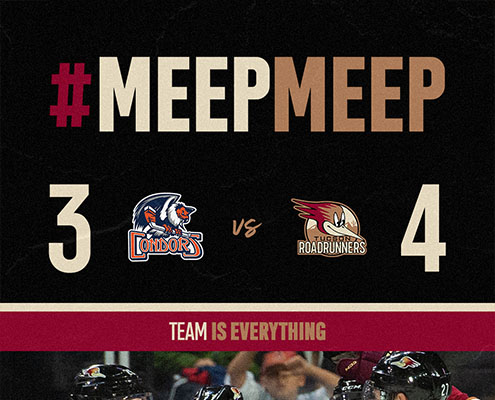 Bakersfield, California – The Tucson Roadrunners defeated the Bakersfield Condors 4-3 in a shootout Saturday night, overcoming first-period deficits of 2-0 and 3-1 while holding Bakersfield scoreless for the final 52:07 of play. Forwards Adam Cracknell and Mike Carcone were successful in Tucson’s only two shootout attempts, while netminder Ivan Prosvetov stopped two of Bakersfield’s three attempts on top of 22 saves in regulation to secure the comeback win. The Roadrunners will continue their three-game road trip Monday when they visit the Coachella Valley Firebirds at the Acrisure Arena.

Roadrunners forwards Adam Cracknell and Mike Carcone found the back of the net in the first two rounds of Saturday’s shootout to lead Tucson to a 4-3 comeback win over the Bakersfield Condors. Backstop Ivan Prosvetov put the finishing touch on the victory with the final save in round three of the shootout. Tucson improved to 2-0 in shootouts this season with the win after they previously defeated the San Jose Barracuda on October 29, which was also a 4-3 come-from-behind road victory on a Saturday.

DAUPHIN DOES IT AGAINST BAKERSFIELD – Tucson forward Laurent Dauphin scored the crucial game-tying goal for the Roadrunners with 9:20 remaining on Saturday against the Bakersfield Condors. The goal was Dauphin’s 13th of the season and fifth in three outings against the Condors. The 27-year-old recorded a hat trick in Tucson’s 5-3 win over Bakersfield on October 23 after notching a goal and an assist the night before, and his equalizer on Saturday moved him into a tie with J.S. Dea and Adam Cracknell for the second-most goals on the team this season.

Forwards Adam Cracknell and Mike Carcone registered assists on Tucson’s first-period score and recorded both shootout goals for the Roadrunners in Saturday’s 4-3 win over the Bakersfield Condors. Cracknell’s assist extended his active scoring streak to three games, with six points (3g 3a) during that span and 17 total points (8g 9a) in 11 outings since the start of December. Carcone extended his scoring streak to a Roadrunners season-high eight games with his assist, as he became the third AHL forward to reach 30 assists on the year. The 26-year-old is one goal away from becoming the second player in the league to light the lamp 20 times, and his next point will make him the first player in the American Hockey League to reach 50 total points on the year.

“It was good. I read the play well, but sometimes you have to go out of the structure. One of the steps to elite goaltending is being able to do that, and I think my flexibility helped me there. It was a nice save.”

Roadrunners goaltender Ivan Prosvetov on his final save in round three of the shootout to lock up a 4-3 Tucson win from Bakersfield.

The Condors opened the scoring in Saturday’s contest with a pair of quick strikes within 34 seconds of each other to take a 2-0 lead with 6:26 gone by in the first period. The Roadrunners answered back less than four minutes later with the first goal of the season by defenseman Dysin Mayo, scored just past the midway point of the frame with assists from Adam Cracknell and Mike Carcone. With the secondary assist, Carcone set a new mark for the longest scoring streak of the season by a Roadrunners skater at eight consecutive outings dating back to December 17. Meanwhile, Cracknell’s primary assist was the Tucson Captain’s sixth point over his last three outings (3g 3a) and fourth point in three games this season against his former team (1g 3a). The Condors regained their two-goal lead with just over seven minutes remaining in the first period on a delayed penalty, making the score 3-1 in their favor entering the middle frame. Tucson got back to within a goal of Bakersfield with the first score of the second period when forward Milos Kelemen tipped a shot from defenseman Cam Crotty for his ninth goal of the season 7:30 into the middle frame. With the secondary assist, Dysin Mayo notched his first multi-point night of the season, as the Roadrunners cut the deficit cut to 3-2. Kelemen’s score was the only offense of the middle 20 minutes after a combined four goals in the first period, and Tucson trailed by one at the start of the final frame from Bakersfield. After playing from behind for nearly 45 minutes, the Roadrunners and Laurent Dauphin evened up the score at 3-3 with 9:20 left to play in regulation. Dauphin tapped in a shot from linemate Curtis Douglas for his 13th goal of the season and fifth score on the year against the Condors. With the score knotted at 3-3, the Roadrunners and goaltender Ivan Prosvetov kept Bakersfield from scoring for the final 47:07 of regulation to send the game to overtime. Both teams took a trip to the man-advantage during the extra three-on-three period, including the Condors only power-play opportunity of the entire contest. Despite the four-on-three situations for both teams, Tucson and Bakersfield remained tied at 3-3 after the five-minute overtime period to send the Roadrunners to their second shootout of the season. Tucson went up 1-0 after Adam Cracknell improved to two-for-two in shootouts this season and Ivan Prosvetov denied Raphael Lavoie in round one, while both Mike Carcone and Bakersfield’s Carter Savoie found the back of the net in round two. Facing Condors forward Seth Griffith at the start of round three, Prosvetov’s kick save put an end to Griffith’s attempt and secured the Roadrunners a 4-3 come-from-behind victory to open the three-game road trip.