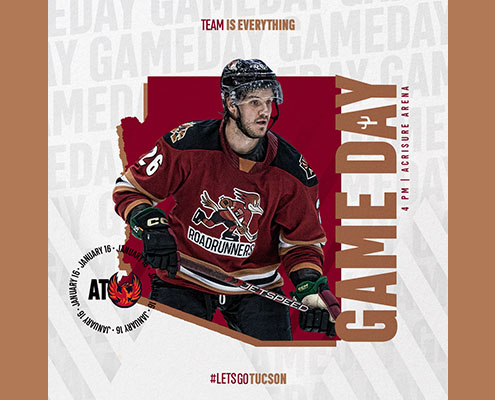 The Roadrunners continue their three-game road trip on Monday with their seventh matchup of the season against the Coachella Valley Firebirds. The Firebirds enter the week atop the American Hockey League in point percentage at .765, while the Roadrunners have handed them two of their six total regulation losses on the year. Both teams are coming off of wins past regulation over the Bakersfield Condors: a 5-4 overtime win in Coachella Valley on Friday, and a 4-3 shootout win by the Roadrunners in Bakersfield on Saturday.

Three Things
1) Tucson enters Monday’s matchup as the only team with a regulation win over the Firebirds at the Acrisure Arena this season: a 3-2 victory on Tuesday, December 20. Since opening their new home in Palm Desert on December 18 against the Roadrunners, the Firebirds are 7-1-0-1 on their home ice with their only other defeat coming at the hands of the Ontario Reign in a shootout on January 8. After their 4-3 shootout victory Saturday night in Bakersfield, Tucson has won three of their last four road contests against Pacific Division opponents, with a 9-5-1-0 overall record on the road against divisional rivals. The standalone contest with Coachella Valley represents the halfway mark of Tucson’s 2022-2023 regular-season schedule, and the first and only Monday game of the year for the Roadrunners.

2) The Roadrunners have found success against the Firebirds this season while on the man-advantage, with ten power-play goals across their six previous meetings. In their last matchup on December 20 at the Acrisure Arena, all three of Tucson’s goals in their 3-2 victory were scored on the man-advantage. The week before, the Roadrunners set a franchise record on their home ice with five total power-play goals in a 7-2 win over the Firebirds. Following that series-opening win at the Tucson Arena on December 13, each of the last three contests between the Roadrunners and Coachella Valley have been decided by one goal.

3) Tucson has received offensive contributions from their usual top scorers against Coachella Valley this season, as four of the Roadrunners top-five scorers overall also lead the team in scoring against the Firebirds. AHL All-Star forward Mike Carcone leads the way with 10 points (6g 4a), while Laurent Dauphin (3g 3a), J.S. Dea (1g 5a) and Cam Dineen (6a) are all tied for second with six points apiece. Carcone (2g 1a), Dauphin (1g 1a) and Dea (2a) each tallied multi-point performances in their last meeting with the Firebirds on December 20, a 3-2 Tucson win. Mike Carcone and Laurent Dauphin also played big roles in the Roadrunners 4-3 shootout victory over the Bakersfield Condors Saturday night, with Dauphin scoring the third-period equalizer and Carcone netting the second of two goals in the shootout. Carcone also assisted on Dysin Mayo’s first-period score to extend his active scoring streak to eight games.

“Staying out of the box was a big thing for us, it kills the rhythm of the team. To give up just one [power-play chance] Saturday was perfect, and you saw we got the win.”

Roadrunners forward Laurent Dauphin on Tucson playing a clean game in Saturday’s 4-3 shootout win over the Bakersfield Condors. The Roadrunners were tasked with just one penalty-kill in the contest, outdrawing the Condors in trips to the man-advantage four to one.

Number to Know
10 – The number of points from Roadrunners forward Mike Carcone in six outings against Coachella Valley this year (6g 4a), the most by any player in the season series. The 26-year-old tallied his only hat trick so far on the year against the Firebirds as part of a four-point performance on December 13 in Tucson. The AHL’s leading scorer notched four points (2g 2a) in the two-game set from Coachella Valley December 18 and 20, which represented games two and three on his active eight-game scoring streak. Carcone’s active streak is a new Roadrunners season-high, with 18 total points (8g 10a) during that span. For the Firebirds, Andrew Poturalski leads Coachella Valley in scoring on the season series with eight total points (2g 6a) in six appearances.

We’re Doing It Live
Today’s game will be broadcast live on AHLtv, as well as on the radio at FOX Sports 1450AM and the iHeartRadio app. Coverage begins at 3:45 with Roadrunners Warm-Up hosted by Jimmy Peebles, before “Voice of the Roadrunners” Adrian Denny has all the action from the Acrisure Arena.