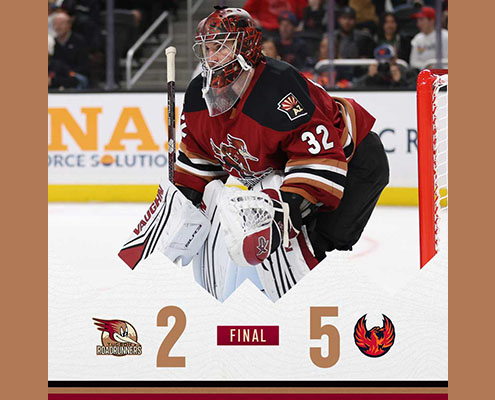 Palm Desert, California – The Tucson Roadrunners fell to the Coachella Valley Firebirds by a score of 5-2 on Monday, with the game representing the midway point of Tucson’s three-game road trip and the halfway mark of their regular-season schedule. Forward Mike Carcone lit the lamp for Tucson in the second period with his 20th goal and league-leading 50th point of the season, while forward Ryan McGregor scored the final goal of the contest with his fourth of the year. The Roadrunners will wrap up their three-game road trip Wednesday night in Henderson against the Silver Knights, before returning to Tucson to open a six-game home stand at the Tucson Arena on Friday against the Bakersfield Condors.

Roadrunners forward Mike Carcone lit the lamp for Tucson on Monday with his team-leading 20th goal of the season, scored with 2:43 gone by in the second period. With the score, Carcone became the third player in the AHL to reach 20 goals on the season, just 1:10 after Firebirds forward Jesper Froden notched his 20th goal of the year earlier in the middle frame. The 26-year-old matched a Roadrunners team record with his ninth consecutive outing with a point, which was last achieved during the 2019-2020 campaign.

BOKO’S BACK AT IT – Tucson forward Boko Imama kicked off Monday’s action with a fight against Coachella Valley’s Ian MacKinnon three minutes into the contest from the Acrisure Arena. The bout marked Imama’s third time dropping the gloves this season and first time since December 22 with San Diego’s Travis Howe. His first fight of the year came against his former team on November 27, as he took on Nate Thompson of the Ontario Reign.

Monday’s contest featuring the Roadrunners and Firebirds marked the seventh of eight meetings this season between Tucson and the AHL affiliate of the Seattle Kraken. Tucson’s meeting with the Firebirds broke a tie between Coachella Valley and the San Jose Barracuda for the Roadrunners most common opponent through the first half of the season, with Monday representing the midway point of the regular season for Tucson. The 5-2 Firebirds win snapped a streak of three-straight matchups between the Roadrunners and Coachella Valley that were decided by one goal.

“It was a nice play by [Adam Cracknell and Curtis Douglas] to get me the puck there. We were just trying to make the most of our shift out there and keep playing hard, and we got rewarded for it.”

Roadrunners forward Ryan McGregor on his third-period goal on Monday against the Coachella Valley Firebirds, his fourth time lighting the lamp this season.

Monday’s action between the Roadrunners and Firebirds began with a fight between Boko Imama and Coachella Valley’s Ian MacKinnon three minutes into the opening frame. The bout was Imama’s third time dropping the gloves this season and first time in the month of January. The Firebirds broke the scoreless tie with just 13 seconds remaining in the first period, as they took a 1-0 lead off of forward Andrew Poturalski’s tenth goal of the season. Coachella Valley’s offense carried over into the start of the second period with a pair of quick goals in the opening 1:36 of the frame to extend their advantage to 3-0 over Tucson. The Roadrunners answered back just over a minute later with a goal by Mike Carcone to cut the deficit to two. With the goal, Carcone became the first 50-point player in the American Hockey League on the year, with 20 goals and 30 assists. The AHL All-Star also extended his active scoring streak to nine games dating back to December 17, which is tied for the Roadrunners franchise record. Coachella Valley regained their three-goal lead at 4-1 with just under 13 minutes remaining in the middle frame, shortly after their second power-play of the contest had expired. After a combined four goals in the opening 8:03 of the second period, the remainder of the middle frame was scoreless, and the Roadrunners entered the final 20 minutes of regulation trailing by three. The Firebirds ended the longest scoreless streak of the contest at 26:48 with their fifth goal of the night, making it a 5-1 game in the final 5:16 of regulation. Tucson got a goal back with 1:03 still to play, as Ryan McGregor lit the lamp for the fourth time this season for a final score of 5-2 from Coachella Valley.