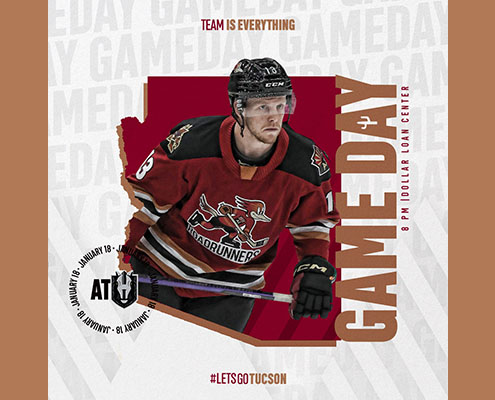 The Roadrunners wrap up their three-game road trip Wednesday night with the fifth matchup of the season against the Henderson Silver Knights. Tucson can secure a winning record on the trip with a victory over the Silver Knights, which would also give the Roadrunners a 3-2 advantage over Henderson in the season series. The AHL affiliate of the Vegas Golden Knights are hosting the Roadrunners for the final outing of their current home stand, after back-to-back wins against the Calgary Wranglers Friday and Saturday from The Dollar Loan Center.

Three Things
1) Tucson and Henderson last faced off on Wednesday, November 16, in a 6-2 Roadrunners win at the Tucson Arena. The Roadrunners opened the contest with their second four-goal period of the season, as they led 4-0 after 20 minutes of play. Four different Tucson skaters notched multi-point performances (Ronald Knot, Mike Carcone, Milos Kelemen, Laurent Dauphin), while goaltender Ivan Prosvetov stopped 29 of 31 shots faced in the Roadrunners third-straight Wednesday win to begin the year. Henderson enters the week having lost each of their last three Wednesday outings, most recently a 6-3 defeat against the Ontario Reign to open their current four-game home stand.

2) The Roadrunners will take on the Silver Knights a total of eight times during the 2022-2023 campaign, with two of the final three meetings after Wednesday set to take place at the Tucson Arena. Wednesday represents the first standalone contest between Tucson and Henderson on the year after a pair of two-game sets earlier in the season. The Roadrunners enter the final game of the road trip with a 3-1-0-0 record in one-off games this season, including their 4-3 shootout win over the Bakersfield Condors to open the trip on Saturday. Meanwhile, the Silver Knights have dropped each of their first two standalone matchups to begin the 2023 calendar year, starting with a 4-3 shootout loss to San Jose on January 4.

3) Wednesday’s game between the Roadrunners and Silver Knights marks the start of the second half of Tucson’s 2022-2023 regular-season schedule. The Roadrunners have an even number of home and away contests remaining on the year, with 18 of their final 36 games set to take place at the Tucson Arena. Following their meeting with the Silver Knights, Tucson will return for a six-game home stand beginning on Friday, January 20 against the Bakersfield Condors. The Roadrunners will host the Condors for the last two times at home this season, before welcoming the Chicago Wolves and Abbotsford Canucks to town for their only trips to the Old Pueblo this year. The balance of home and away contests remaining will balance out for Tucson after their seven-game Gem Show Road Trip from January 31 to February 15, with 12 of the Roadrunners final 22 games of the regular season scheduled for the Tucson Arena.

“It’s always nice to be back. I missed the guys and battling with them. The result was unfortunate, but we just have to regroup and get ready for [Henderson] on Wednesday.”

Roadrunners forward Ben McCartney on returning to the lineup for Monday’s contest with the Coachella Valley Firebirds. McCartney was back on the ice for the first time since January 6 at home against the Colorado Eagles.

Number to Know
9 – The number of consecutive games where Roadrunners forward Mike Carcone has recorded a point, which is tied for the longest streak in Tucson franchise history. Carcone can set a new Roadrunners record with a point on Wednesday against the Silver Knights, who he already has four points (1g 3a) in as many games against this season. The 26-year-old became the first player in the American Hockey League this season to reach 50 points this on Monday against Coachella Valley, as he recorded his 20th goal of the year. Carcone enters Wednesday with a league-leading 1.61 points per-game among qualified skaters and an eight-point lead over second place in total scoring.

We’re Doing It Live
Tonight’s game will be broadcast live on AHLtv, as well as on the radio at FOX Sports 1450AM and the iHeartRadio app. Coverage begins at 7:45 with Roadrunners Warm-Up hosted by Jimmy Peebles, before “Voice of the Roadrunners” Adrian Denny has all the action from The Dollar Loan Center.