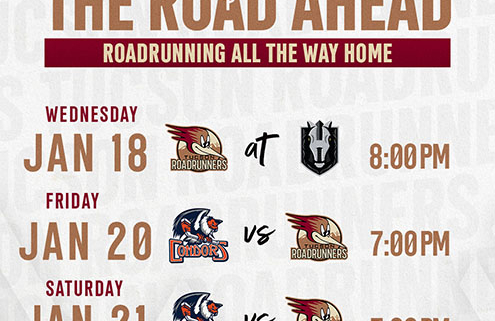 Tucson Roadrunners Road Ahead: Roadrunning All The Way Home

The Roadrunners wrap up their three-game road trip Wednesday night from Henderson, as they’ll clash with the Silver Knights for the fifth time this season. A win against the AHL affiliate of the Vegas Golden Knights would secure a winning record for Tucson on their current road trip, after a 4-3 shootout victory over the Bakersfield Condors on Saturday. The Roadrunners opened the 2022-2023 regular season with a 2-1 win over the Silver Knights, as Milos Kelemen and Tyson Empey’s second-period goals, scored two minutes apart, proved to be the difference.

Following their midweek matchup in Henderson against the Silver Knights on Wednesday, the Roadrunners will return home for a six-game home stand with a pair of games apiece against the Bakersfield Condors, Chicago Wolves, and Abbotsford Canucks. The stretch kicks off with the first El Lazo de Tucson night of the season on Friday, January 20, followed by Harry Potter night on Saturday, January 21. The next weekend features the fan-favorite Star Wars Night on Saturday, January 28, and Arizona Coyotes Day the following afternoon on Sunday, January 29. For the full promotions schedule and to purchase tickets, visit TucsonRoadrunners.com/Fun.

In celebration of Martin Luther King Jr. Day, the Tucson Roadrunners unveiled Monday Roadrunners themed and Black History Month inspired warm-up jerseys that will be worn prior to their home games on February 18 and 19 against the Henderson Silver Knights. The design of the jerseys was led by Roadrunners forward Boko Imama, who spearheaded last February’s Enough Is Enough Campaign for Tucson. In addition to the jerseys, Roadrunners themed ties will also be available for purchase during Tucson’s February home games. More details, including community partners and purchasing options, will be released in the coming weeks ahead of their debut on February 18.

With a goal on Monday against Coachella Valley, Roadrunners forward Mike Carcone became the first player in the AHL to record 50 points on the season. Carcone was also the third player in the American Hockey League to notch 20 total goals on the season with his second-period tally. The 26-year-old has amassed eight points (4g 4a) in four outings since returning to the Roadrunners from his first NHL call-up of the season on January 10, with 19 total points (9g 10a) during his active nine-game scoring streak. The streak matches a Tucson franchise record for the longest scoring streak in team history, which was last set by Michael Bunting during the 2019-2020 campaign.

Tucson opened their current road trip with a 4-3 come-from-behind shootout win over the Bakersfield Condors, marking their second shootout victory of the season. Saturday’s defeat of the Condors had several similarities to the Roadrunners first shootout win of the season on October 29 against the San Jose Barracuda, including the score (4-3), the day of the week (Saturday), and the players used by Tucson in the shootout (Adam Cracknell and Mike Carcone). The Roadrunners also overcame third-period deficits in both wins, with game-tying goals in the back half of the final frame.

Roadrunners veteran defenseman Dysin Mayo notched his first multi-point night of the season on Saturday against the Bakersfield Condors, as he factored into each of Tucson’s first two goals. The 26-year-old put the Roadrunners on the board with his first goal of the season in the first period and tallied the secondary assist on Milos Kelemen’s second-period strike to complete the two-point performance. Tucson spread the offense around in their 4-3 win over Bakersfield, as Mayo was the only skater to notch multiple points on the night. Mayo has appeared in 13 games apiece for the Roadrunners and the Arizona Coyotes this year and is the only player in franchise history to appear in each of Tucson’s first seven seasons.

Sights Set On The Second Half

Monday’s matchup between the Roadrunners and Coachella Valley Firebirds marked the halfway point of Tucson’s regular-season schedule. With 36 games played and 36 games remaining, the Roadunners have an even number of home and away contests left on their schedule at 18 apiece. A third of their remaining outings at the Tucson Arena will take place during the upcoming six-game home stand, which is tied for the longest streak of consecutive home games for the Roadrunners this year. Following the home stand, Tucson will embark on their longest road trip of the season, with seven-straight games away from the Old Pueblo as part of the Gem Show Road Trip.

The Roadrunners have seen a number of players return to the everyday lineup since the start of 2023. Forward Ben McCartney and defenseman Ronald Knot most recently rejoined the roster on Monday in Coachella Valley, as McCartney made his first appearance since January 6 and Knot had been absent since December 31. The game before in Bakersfield, forward Travis Barron and defenseman Cam Crotty each took the ice after missing time. Finally, high-scoring forwards Adam Cracknell and Mike Carcone rejoined the Roadrunners top line during their previous home stand, after last appearing with Tucson before the Holiday Break in December.

Two Tucson-based goaltenders made their AHL season debuts at the Tucson Arena on Wednesday, January 11, as the Roadrunners hosted the Milwaukee Admirals. 23-year-old David Tendeck was recalled by Tucson from the ECHL’s Atlanta Gladiators and made 32 saves as the starting backstop in the series finale with the Admirals. In addition, Tucson Arena Zamboni Driver and Ice Maintenance Team Supervisor Eric Brindza served as Milwaukee’s Emergency Backup Goaltender with Yaroslav Askarov called up to the NHL by the Nashville Predators prior to the game.

Tucson Roadrunners Happy Hour airs every Tuesday at 5 p.m. on FOX Sports 1450AM and the iHeartRadio app, with a podcast version also available after each episode on the iHeartRadio app. This week, co-hosts Adrian Denny and Kim Cota-Robles will be joined by forward Travis Barron, as well as TucsonRoadrunners.com’s Jimmy Peebles. In addition, a new episode of the Tucson Roadrunners Insider Podcast released on Sunday, as “Voice of the Roadrunners” Adrian Denny and TucsonRoadrunners.com’s Jimmy Peebles heard from goaltender Ivan Prosvetov after Tucson’s 4-3 shootout win over Bakersfield to start their current road trip. The podcast can be found on the iHeartRadio App.