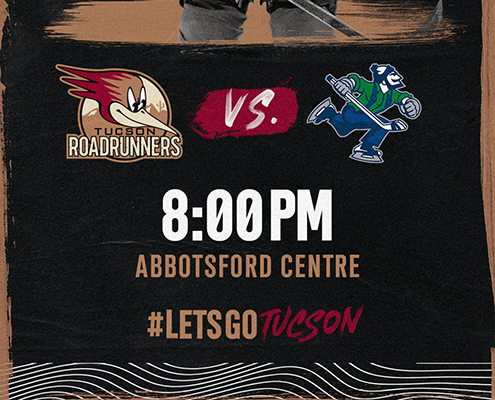 The Tucson Roadrunners are back in Abbotsford to face the Canucks for the second time this week Wednesday night at the Abbotsford Centre. The game will mark the final meeting between Tucson and Abbotsford in the Canucks inaugural season, with the Roadrunners currently holding a 2-1 advantage on the year. Wednesday’s contest in British Columbia is the fourth of six games on Tucson’s current road trip, which will conclude with a pair of matchups against the Colorado Eagles Friday and Saturday. Joining the goaltender crew for the Roadrunners is backstop David Tendeck from the Rapid City Rush, as Ivan Prosvetov has been recalled by the Arizona Coyotes for their own road trip in the Pacific Northwest. Tendeck was drafted by the Coyotes in the sixth round (#158 overall) of the 2018 NHL Draft.

Three Things
1) Monday’s meeting with the Abbotsford Canucks set a new season-high for the most combined goals in a game between the Roadrunners and their opponent. Tucson tallied five goals for the second-straight contest, and third time in the last seven games. Five different Roadrunners recorded multiple-point performances, led by rookie Matias Maccelli with four assists. The outing marks Maccelli’s first four-assist performance, and third game this season with four points or more. The effort gave the 21-year-old sole possession of second place in the AHL for assists (34) and third for total points (45).

2) Forward Jan Jenik continued his impressive sophomore season with his sixth multi-point outing of the season Monday night in Abbotsford (1g 1a). The 21-year-old has nearly doubled his point total from last season in the same number of games played (29), and is in third or better on the team for goals (3rd), assists (2nd), points (3rd), power-play goals (1st) and shots on goal (3rd). Jenik has not been held without a point in back-to-back games since November 5 and 6, and only twice overall on the year.

3) Reigning AHL Player of the Week Mike Carcone once again lit the lamp for his sixth goal as many periods Monday night when he opened the scoring for the Roadrunners in the first period. The goal also marked Carcone’s sixth time scoring the first goal of the game for Tucson on the season, and fourth time in just the last six contests. The 25-year-old has averaged 1.15 points per-game since the start of 2022, and currently leads the Roadrunners in goals for the second-straight season.

What’s The Word?
Roadrunners forward Boko Imama on the role of Tucson’s coaching staff during a stretch of the season packed with games:

“The coaches are doing their best job to guide us into the game, it’s just on us to be dialed in and execute.”

Number to Know
3 – The number of power-play goals scored by the Roadrunners in Monday’s series opener with the Abbotsford Canucks, matching a season-high. Jan Jenik was the first to cash in on special teams for Tucson with his team-leading seventh power-play strike 14:53 into the second period, followed by Hudson Fasching and Cam Dineen in the third. Forward Matias Maccelli assisted on all three scores to move into second place in the AHL for total assists. The Roadrunners previously scored three goals while on the man-advantage twice on the season against the Ontario Reign.

We’re Doing It Live
Today’s game will be broadcast on AHLtv, as well as on the radio on Fox Sports 1450AM, or on the iHeartRadio app. Coverage begins at 7:45 p.m. MST with Roadrunners Warm-Up, as Jimmy Peebles gets you ready for the game before “Voice of the Roadrunners” Adrian Denny has the call at 8:00 p.m. live from the Abbotsford Centre.