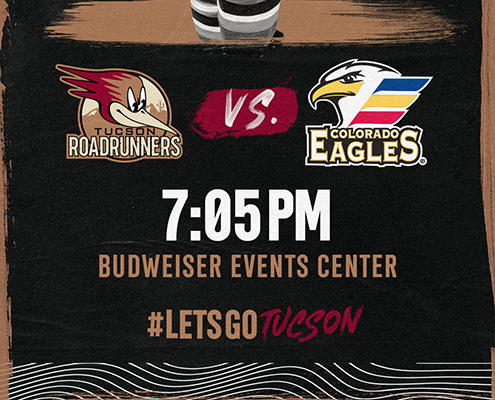 The Tucson Roadrunners will reach the third and final stop of their six-game road trip Friday night, as they’ll take on the Colorado Eagles for the first of two back-to-back contests at the Budweiser Events Center. This weekend marks the Roadrunners second trip to Loveland on the season, after an identical pair of matchups Friday, December 3 and Saturday, December 4. Tucson took the most recent series opener in Colorado by a score of 4-1, with power-play goals scored by Ben McCartney and JJ Moser in the first period.

Three Things
1) Tucson enters the series opener with Colorado undefeated in their last three Friday-night contests against the Eagles dating back to February 26, 2021. Ivan Prosvetov was in net for all three victories, stopping a total of 99 shots while only allowing six goals across February 26, April 23, and December 3, 2021. Prosvetov held the Eagles scoreless for the first 56:26 of a 4-1 win on December 3, the first meeting between Tucson and Colorado on the season. Two of the three matchups were decided by just one goal, including a 4-3 overtime win that saw defenseman Kyle Capobianco net the game-tying goal with just 15 seconds left in regulation on February 26, 2021. Current Roadrunners goal leader Mike Carcone broke a third period tie in the final five minutes of regulation on April 23, a 3-2 win for Tucson.

2) The Roadrunners have scored five power-play goals in four meetings this season against the Colorado Eagles, each by a different player. Among them are Mike Carcone and Matias Maccelli, who have recorded a point in three of the four contests with Colorado this season. The pair have combined for 15 points (7g 8a) across the first four games of Tucson’s current road trip, including a hat trick by Carcone on February 5 against San Diego and a four-assist effort by Maccelli on February 7 in Abbotsford. The pair are the top-two on the Roadrunners for goals, points and shots, accounting for over 25% of Tucson’s total points.

3) Forward Travis Barron will be returning to Colorado for the second time since joining the Roadrunners this past offseason. The 23-year-old spent the previous three seasons with the Eagles after being drafted by the Colorado Avalanche in the seventh round (#191 overall) in the 2016 NHL Draft. Barron has three points in four games on the team’s current road trip, including his second multiple-point performance of the season on Monday against Abbotsford (1g 1a). In his first season with the Roadrunners, Barron has set an AHL career-high for points in a season with six goals and seven assists.

“We’re not a run-and-gun type of team. We want to make sure we’re playing with structure over the top of people. I think a lot of it has to come down to discipline in our structure and in terms of staying out of the box.”

Roadrunners Head Coach Jay Varady on Tucson’s offensive game plan heading into the weekend with Colorado. The Roadrunners have put up five goals in two of the last three contests on their current road trip.

Number to Know
17 – The number of saves made by goaltender David Tendeck in Wednesday’s matchup with the Abbotsford Canucks in British Columbia. The 22-year-old made his AHL debut for the Roadrunners and held the Canucks scoreless for the final 36:47 of regulation. The product of North Vancouver, BC was able to make his debut nearby in Abbotsford after being drafted in 2018 by the Arizona Coyotes from the WHL’s Vancouver Giants.

We’re Doing It Live
Today’s game will be broadcast on AHLtv, as well as on the radio on Fox Sports 1450AM, or on the iHeartRadio app. Coverage begins at 6:45 p.m. MST with Roadrunners Warm-Up, as Jimmy Peebles gets you ready for the game before “Voice of the Roadrunners” Adrian Denny has the call at 7:05 p.m. live from the Budweiser Events Center.