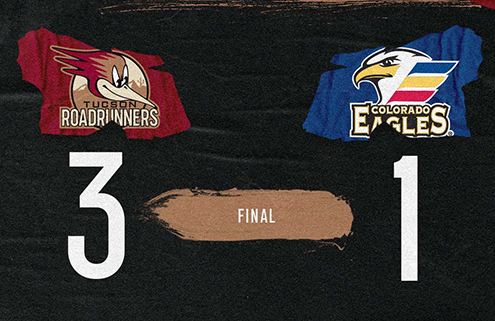 Loveland, Colorado – The Tucson Roadrunners opened the final weekend of their six-game road trip with a 3-1 victory over the Colorado Eagles at the Budweiser Events Center. Tucson held the hometown Eagles scoreless for the first 55:43 of the contest, backed by 24 of goaltender David Tendeck’s 26 total saves. Matias Maccelli, Cam Dineen, and Mike Carcone each recorded multiple-point performances in the first 17:08 of the opening frame, as the Roadrunners jumped to a 3-0 lead starting with their fastest goal to start a game this season 1:11 in by Travis Barron. The Roadrunners added goals later in the period by Ben McCartney and Mike Carcone, as they led for the final 58:49 of the game. Goaltender David Tendeck made his first start in the AHL, stopping 27 shots and earning his first win in the American Hockey League.

Tucson set the tone early with a goal just 1:11 into the opening period, scored by Travis Barron against his former team. The 23-year-old spent the last three seasons in the Colorado Avalanche organization, tallying 54 games with the Eagles. Barron’s score extended his career-high for goals in a season to seven, giving him four points on the road trip. The next 12:39 of the first frame were without a goal, until Tucson extended their lead on the power-play with 6:10 remaining in the period. The goal was scored by Ben McCartney for his fifth score while on the man-advantage this season and ninth goal overall. The Roadrunners added to their advantage with 2:52 still to play in the first period, as Mike Carcone scored the team’s second power-play goal of the night and his team-leading 17th strike of the season. The goal gave the Roadrunners their third three-goal period of the road trip and a 3-0 lead entering the second period. The only action of the middle frame came in the Roadrunners end, as defenseman Cam Crotty dropped the gloves with Colorado’s Matthew Boucher for his first fight of the season. After taking four trips to the power-play without committing a penalty of their own, Tucson was called for tripping in the final minute of the second period to give Colorado their first man-advantage of the evening. The Roadrunners were able to fend off the power-play in both periods, maintaining their 3-0 lead. The Eagles avoided a shutout with a goal on their third trip to the man-advantage in the contest 15:43 into the final frame. The score ended goaltender David Tendeck and the Roadrunners streak of 92:30 and 41 consecutive saves without allowing a goal. Colorado mounted a late comeback effort but crucial saves by Tendeck and the Roadrunners defense kept the Eagles at bay, securing a 3-1 win for Tucson in their fourth-straight victory against Colorado on a Friday night.

Tucson wraps up the road trip Saturday night with another matchup against the Colorado Eagles. The final game between the Roadrunners and Eagles on the road in Colorado this season faces off at 7:05 p.m. MST with coverage beginning at 6:45 on Fox Sports 1450AM with Roadrunners Warm-Up hosted by Jimmy Peebles. Then, “Voice of the Roadrunners” Adrian Denny will have all the action live from the Budweiser Events Center.

“That was great, it was what we needed. I thought we bounced back and played a strong and tight game, just like the coaches were preaching to us. I thought we executed well.”

Roadrunners defenseman Cam Dineen on Tucson’s 3-1 win over the Colorado Eagles Friday night at the Budweiser Events Center. The 23-year-old recorded a pair of assists on back-to-back power-play goals in the first period against the Eagles.

TENDECK PROTECTS THE NET – Tucson Roadrunners goaltender David Tendeck made his first start in the American Hockey League Friday night on the road against the Colorado Eagles. The 22-year-old stopped the first 24 shots faced in the contest, holding the Eagles scoreless for the first 55:43 of regulation. Tendeck made his debut in relief for Tucson on Wednesday against the Abbotsford Canucks, beginning a stretch of 92:30 and 41 consecutive saves to begin his AHL career.

Watch Tucson Roadrunners forward Travis Barron open the scoring in Friday night’s contest with the Colorado Eagles. Barron set a new team-best for fastest goal to begin a game on the season, as he tallied his career-high seventh goal of the year just 1:11 into the first period in Loveland.

Tucson Roadrunners defenseman Cam Dineen plays the puck in Friday night’s 3-1 win over the Colorado Eagles. Dineen tallied a pair of assists for his third multiple-point performance in the last four games. The 23-year-old has eight points in the last three contests, as well as ten points since returning to the Roadrunners from the Arizona Coyotes during Tucson’s last homestand to close out the month of January.