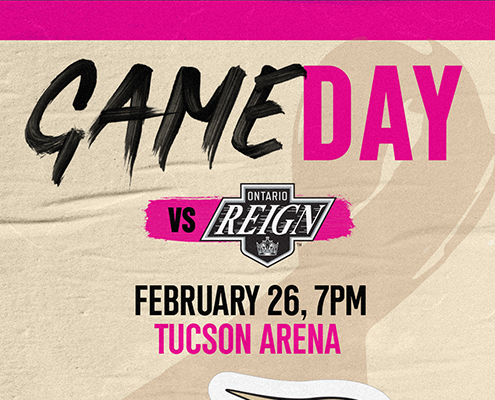 The Roadrunners will be back at the Tucson Arena Saturday and Sunday to host the Ontario Reign in the first of three-straight meetings over five nights. The two-game set at home marks the second half of a four-game home stand for Tucson that began last weekend with a series split against the Henderson Silver Knights. Last Saturday’s game with Henderson saw the Roadrunners erase a 3-2 deficit in the third period with a pair of power-play goals to secure a 4-3 victory.

Three Things
1) Saturday’s matchup will be the sixth meeting between Tucson and Ontario on the season. The Roadrunners have tallied nine power-play goals in the five previous games with the Reign, including five over Ontario’s last trip to the Old Pueblo November 12 and 13, 2021. Tucson has scored three power-play goals in two of the five contests with Ontario this year, including three in the third period alone on November 12. The Roadrunners average more goals per-game this season (4.6) against the Reign than any other opponent, while never scoring less than three goals in any contest. Forward Boko Imama and defenseman Cole Hults each recorded their first goals of the season against their former team, with Hults notching his first multi-point performance of the season against the Reign on January 23 in Ontario.

2) Joining the Roadrunners for the weekend from the Utah Grizzlies of the ECHL is defenseman Andrew Nielsen. The 25-year-old has 27 points (8g 19a) in 36 games with Utah this season and has amassed 251 career AHL games with the Toronto Marlies, Stockton Heat and Hershey Bears. He was on the Roadrunners Training Camp Roster prior to the 2020-2021 campaign. Nielsen joins the Tucson defense after Vlad Kolyachonok was recalled to the Arizona Coyotes earlier this week. Kolyachonok tallied his first NHL point, an assist, on Wednesday against the Los Angeles Kings, his fifth appearance with the Coyotes on the season after making his NHL debut on January 12. Longtime Roadrunners blue-liner Dysin Mayo secured his spot on the Coyotes defensive unit Friday afternoon when he signed a three-year contract, just four months after making his NHL debut with Arizona on October 21, 2021.

3) The two-game set against the Ontario Reign Saturday and Sunday represents Roadrunners Fight Cancer weekend, with plenty of special events and offers for fans taking place. Tucson will be wearing special hot pink jerseys as part of the weekend that will be auctioned off live after Sunday’s contest. All proceeds from the auction will be going to Banner Health University of Arizona Cancer Center. Arena-exclusive hot pink jerseys and t-shirts will be available for purchase at the team’s Just Sports merchandise stands during both games. Pink the Rink lemonade will be offered for $2 at Tucson Arena Concession Stands. Upon entry, fans will be given “I Pink For” signs to fill out and show who they are fighting for in the battle against cancer.

“It’s awesome, the guys are excited. It’s for a very good and big cause. A lot of guys have been affected by it, so they’re happy to be able to support it.”

Roadrunners defenseman Cole Hults on the team wearing their special hot pink jerseys against the Ontario Reign Saturday and Sunday as part of Roadrunners Fight Cancer.

Number to Know
2.6 – The average points per-game for Roadrunners rookie Matias Maccelli in five games against the Ontario Reign this season. Maccelli kicked off the season series with Ontario by exploding for a five-point performance and his first career hat trick on November 12. Two of the 21-year-old’s seven 3+ point outings this year have come against the Reign, including three assists in Tucson’s last matchup in Ontario on January 23.

We’re Doing It Live
Today’s game will be broadcast on AHLtv, as well as on the radio on Fox Sports 1450AM, or on the iHeartRadio app. Coverage begins at 6:45 p.m. MST with Roadrunners Warm-Up, as Jimmy Peebles gets you ready for the game before “Voice of the Roadrunners” Adrian Denny has the call at 7:00 p.m. live from the Tucson Arena.

Followon TwitterSubscribeto RSS Feed
RRTV In The Community: Dusty Thanks Our Healthcare Heroes