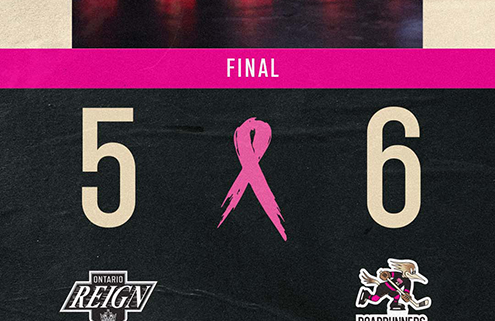 Tucson, Arizona – The Tucson Roadrunners hosted the Ontario Reign Saturday night at the Tucson Arena to open a two-game set with the Reign as part of Roadrunners Fight Cancer Weekend. Tucson battled back from down 2-1 and 3-2 to secure a 6-5 victory. Mike Carcone recorded his second hat trick in the last month and fifth of his AHL career, while Jan Jenik (2g 1a), Ben McCartney (1g 3a) and Matias Maccelli (2a) each recorded multiple-point performances. Goaltender Ivan Prosvetov stopped 36 shots in the third win over his last four starts at home.

The action got started early in Saturday’s contest, beginning with a fight between Tucson’s Cedric Lacroix and Ontario’s Jacob Doty. The bout sparked Roadrunners offensive attack that led to a quick 1-0 lead. Mike Carcone took a pass from Matias Maccelli in deep behind the net for his team-leading 19th goal of the season and Maccelli’s 40th assist. Ontario answered back with a pair of goals exactly three minutes apart to take a 2-1 lead with 4:13 remaining in the opening frame. The lead didn’t last for long, as Tucson evened up the score at two with 1:56 still to play in the period. Ben McCartney netted the equalizer for his tenth goal of the season. The Roadrunners went on their first man-advantage of the contest 33 seconds later and were able to retake the lead on the power-play with 31 seconds remaining in the period. The goal marked Mike Carcone’s second score of the period and 20th overall on the season. The man-advantage score also brought Carcone into a tie with Jan Jenik for most power-play goals on the team with eight. After the final 7:13 of the first period saw a combined four goals, the opening 7:42 of the second period was without a score. Ontario opened the scoring in the middle frame with a pair of goals 23 seconds apart to take their second lead of the night at 4-3. Tucson fought back and tied the game back up at 4-4 with 6:45 left to play in the middle period. The goal was scored unassisted by Jan Jenik for his 14th of the season. Jenik became the fourth Roadrunner on the night to post a multiple-point performance, as he assisted on Ben McCartney’s goal in the first period. The score remained even at 4-4 for the remainder of the second period. The third period opened with roughing penalties assessed to each team’s number 24: Tucson’s Hudson Fasching and Ontario’s Cameron Gaunce. Fasching picked up an additional roughing penalty to send the Reign to the man-advantage, but nothing came of it as the score remained knotted at four. After giving the Roadrunners their first and second leads of the night, Mike Carcone gave them their third. With 4:18 gone by in the third period, Carcone poked the puck away from Ontario backstop Matthew Villalta in the crease to complete the hat trick and take a 5-4 lead. The hat trick marked Carcone’s second of the month and fifth of his AHL career. The Roadrunners held on to the one-goal lead for the next 11:17, before adding an insurance goal from Jan Jenik with 4:25 left to play in regulation, makring the first two-goal for either team in the contest. The goal became more significant when Ontario went 6-on-4 with an empty net and a power-play and used it to pull to within one in the final 2:04. Despite the goal, the Roadrunners and Ivan Prosvetov were able to fend off a last-chance Reign attack to come away with a 6-5 victory to open the series.

Tucson will be back at it against the Ontario Reign to wrap up the series and Roadrunners Fight Cancer Weekend Sunday afternoon at 3:00 p.m. MST. Coverage begins at 2:45 on Fox Sports 1450AM with Roadrunners Warm-Up hosted by Jimmy Peebles. Then, “Voice of the Roadrunners” Adrian Denny will have all the action live from the Tucson Arena. The game will also be televised live in Southern Arizona on The CW Tucson, as the Roadrunners look for a sweep of the Reign.

Roadrunners forward Mike Carcone on the strength of his linemates that led to the 25-year-old’s fifth career AHL hat trick Saturday night.

CARCONE KEEPS CRUISING – Roadrunners forward Mike Carcone gave Tucson each of their three leads in Saturday’s 6-5 win over the Ontario Reign, earning his second hat trick in the month of February. Carcone’s first hat trick of the month came on February 5 in San Diego to cap off a five-goal weekend. Carcone leads the Roadrunners in goals with 21 and 11 in the month of February alone, which is tied for the league lead.

Watch Tucson Roadrunners forward Jan Jenik net the eventual game-winning goal in Saturday’s 6-5 win over the Ontario Reign. The goal marked the second score of the game for Jenik and his second two-goal outing in his last three appearances.

The Tucson Roadrunners kicked off Roadrunners Fight Cancer Weekend Saturday night at the Tucson Arena. The Roadrunners wore special hot pink jerseys as they defeated the Ontario Reign 6-5. Tucson will wear them again for Sunday’s series finale, before auctioning off the game-worn jerseys after the contest. All proceeds from the auction will go to the Banner Health University of Arizona Cancer Center.