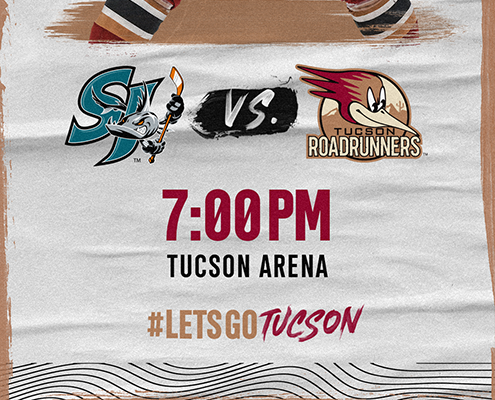 The Tucson Roadrunners will continue their series against the San Jose Barracuda Friday night, with the second of three games taking place at the Tucson Arena. The Roadrunners will look to even the series at one win apiece, after the Barracuda took the series opener on Wednesday night. Friday’s matchup between the Roadrunners and Barracuda is the second game of a hockey doubleheader taking place at the Tucson Arena. Prior to The Roadrunners hosting San Jose at 7 p.m., the Tucson Fire Department and Tucson Police Department will be facing off in their Inaugural Battle of the Badges Game at 4 p.m. MST. The two organizations will be raising money for the Erik Hite Foundation and I Am You 360. A ticket for Friday night is good for both games and can be purchased HERE. Fans will be able to take advantage of $2 Soft Drinks, $3 Hot Dogs and $3 Draft Beers at both games.

Three Things
1) Friday’s game marks only the second time all season that Tucson has had exactly one day of rest between home games. The first came back in January during a three-game set with the Bakersfield Condors. In the contest following the off day, Tucson tallied four goals on 28 shots with a pair of fights against the Condors. Two of the goals were scored on the power-play in the first period by Jan Jenik and Cameron Hebig, while Hudson Fasching added a shorthanded score in the final 1:11 of regulation. The Roadrunners are also 3-1 this season in Friday home games with their last such win coming on December 10 against Stockton, a 5-4 shootout win that saw goaltender Ivan Prosvetov match a career-high of 47 saves. Tucson is 5-1-1 in the second of consecutive games against the Barracuda dating back to the 2018-2019 campaign.

2) The story of Wednesday night’s series opener between Tucson and San Jose was the physical play from start to finish. The Roadrunners and Barracuda combined for five fights throughout the contest, a new season-high for most bouts in a game for Tucson. Wednesday’s game was also the first time this season the Roadrunners had at least one player drop the gloves in all three periods, with three in the third period also representing a season-high for most fights in a single frame. Tyson Empey, Travis Barron, Jan Jenik, Cedric Lacroix and Stephen Baylis all dropped the gloves for Tucson, tying Empey with Boko Imama for the team lead in fights with 8 and giving him sole possession of the most bouts since the start of 2022 with 5. Tucson and San Jose combined for 114 penalty minutes, the most in a game for the Roadrunners this year.

3) Joining the Roadrunners roster this weekend is forward Philip Lagunov. The 23-year-old arrives in Tucson from the University of Vermont, where he was the leading scorer this season with 16 points (8g 8a). Lagunov is the second college player added to the lineup in the last week, joining forward Mitch Lewandowski from Michigan State. In his first three seasons at UMass-Amherst from 2017 to 2020, Lagunov faced off against new teammate Cam Crotty and Boston University six times. Lagunov and Crotty each tallied a goal and an assist across the head-to-head matchups. The Mississauga, Ontario native was also a teammate of current San Jose Sharks forward John Leonard for three seasons with UMass-Amherst.

“This happens all over the country with a lot of police and fire departments. We felt like this was something we wanted to do to represent both departments for the City of Tucson. There’s a lot of players for both sides so it kind of came together naturally… There will be full game ceremonies: the National Anthem, the announcement of the players, the whole nine yards.”

Number to Know
40 – The number of shots on goal by the Roadrunners in Wednesday’s series opener with the Barracuda. The mark matches a season-high for Tucson, which was first set at home against the Bakersfield Condors on January 29, a 3-2 overtime win. In seven of their 12 total home series this year, The Roadrunners have increased their shots on goal total from the previous game in the set, including in each matchup of the three-game series with Bakersfield from January 26 to 29. Tucson has now recorded 78 total in their last two meetings with San Jose.

We’re Doing It Live
Tonight’s game will be broadcast on AHLtv, as well as on the radio on Fox Sports 1450AM or on the iHeartRadio app. Coverage begins at 6:45 p.m. MST with Roadrunners Warm-Up, as Jimmy Peebles gets you ready for the game before “Voice of the Roadrunners” Adrian Denny has the call at 7:00 p.m. live from the Tucson Arena.

Followon TwitterSubscribeto RSS Feed
RRTV In The Community: Battle of the Badges