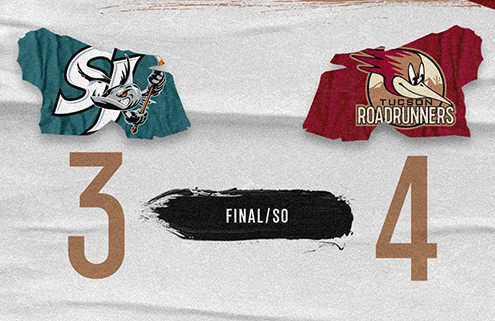 Tucson, Arizona – The Tucson Roadrunners continued their series against the San Jose Barracuda Friday night, with the second of three games taking place with the San Jose Sharks AHL affiliate. After falling behind 1-0 early in the contest, the Roadrunners answered back with three consecutive goals before San Jose forced overtime with a pair of goals late in regulation. A scoreless overtime period led the Roadrunners and Barracuda to a shootout, before Jan Jenik and Mike Carcone found the back of the net to give Tucson a 4-3 shootout victory on home ice. A crowd of 5,111 fans came out to cheer on the Roadrunners as they celebrated First Responders Night at the Tucson Arena, the largest Friday night attendance since October 18, 2019. Ivan Prosvetov was once again in net for Tucson after starting the series opener, as he turned 31 of 34 shots aside and was two of three in the shootout.

Watch Roadrunners forwards Jan Jenik and Mike Carcone net the pair of Tucson shootout goals as they defeated the San Jose Barracuda by a score of 4-3, evening the three-game series at one win apiece. Jenik also recorded an assist in the contest to reach four points (1g 3a) in five outings against the Barracuda this season. Carcone was back with Tucson for the first time since suiting up for the Arizona Coyotes on March 14 in Ottawa, as he set a new Roadrunners franchise record for goals in a season with his 24th of the year in the third period.

FRIDAY NIGHT FUN – Tucson’s 4-3 shootout victory over the San Jose Barracuda on Friday gave the Roadrunners a 4-1 record in Friday night home games on the season. Their last such win came on December 10, 2021, over the Stockton Heat. The contest was another shootout win but by a score of 5-4, with Ivan Prosvetov matching a career-high with 47 saves and going three of four in the shootout.

“It’s huge, that was a four-point game. We’re trying to chase the playoffs and we have San Jose in our way… so those points are huge.”

Roadrunners forward Mike Carcone on the importance of Friday’s 4-3 win against San Jose with just 17 games remaining in the regular season.

Like the series opener on Wednesday, San Jose scored within the first minute of the contest to take a 1-0 lead. The goal came after Tucson was called for a penalty just 15 seconds into the first period, giving the Barracuda the first power-play of the night. The Roadrunners had a quick answer this time around, with a goal by Hudson Fasching less than 30 seconds later to make it a 1-1 game just 56 seconds into the evening. After 17:21 of scoreless hockey, Fasching added another goal with 1:43 still to play in the opening frame to give the Roadrunners a 2-1 lead. The score came just nine seconds into Tucson’s fourth man-advantage of the period and gave the Roadrunners Captain his tenth goal of the year. The 26-year-old became the sixth Roadrunner to reach double-digit goals and assists on the season, as Tucson carried the 2-1 advantage into the second period. The middle frame began with a fight between Tucson’s Boko Imama and San Jose’s Montana Onyebuchi just five seconds after the opening face-off. The bout marked Imama’s ninth time dropping the gloves this season, retaking sole possession for the team lead. Despite five combined power-plays in the second period, the middle 20 minutes were without a goal as Tucson entered the third period still leading 2-1. Tucson added a crucial insurance goal just past the midway point of the third period, extending their lead to 3-1. The goal was scored by Mike Carcone in his first outing back from the Arizona Coyotes for his 24th of the year with Tucson, setting a new Roadrunners franchise record for goals in a season. The score broke a previous four-way tie for the record, shared by former Roadrunner and current Barracuda forward Lane Pederson. Pederson scored a goal for San Jose 2:44 later to bring the Barracuda back to within one with 7:13 still to play in regulation. Less than two minutes later, San Jose got the equalizer to make it a 3-3 game in the final 5:47 of the third period. The rest of regulation was without a goal, sending the Roadrunners to overtime for the second time in their last three games. After five minutes of three-on-three overtime hockey, the score was still knotted at 3-3, sending Tucson and San Jose to a shootout. The first round of the shootout was all Tucson, as Jan Jenik found the back of the net and Ivan Prosvetov denied Lane Pederson at the other end. The Barracuda flipped the script in the next round, as Joachim Blichfeld slipped the puck past Prosvetov and Cameron Hebig came up empty-handed. In the decisive third round, Mike Carcone scored to give Tucson their second goal of the shootout. With all eyes on Ivan Prosvetov, the 23-year-old turned aside an attempt by Sasha Chmelevski, as the Roadrunners came away with the 4-3 victory for their second shootout win of the season.

The Roadrunners will wrap up the three-game set with the San Jose Barracuda Saturday night at the Tucson Arena. It will also be the final meeting between Tucson and San Jose on the season, as the Roadrunners celebrate Hockey is for Everyone Night. The series finale is scheduled for 7:00 p.m. MST, with coverage beginning at 6:45 p.m. MST on Fox Sports 1450AM with Roadrunners Warm-Up hosted by Jimmy Peebles. Then, “Voice of the Roadrunners” Adrian Denny will have all the action live from the Tucson Arena.