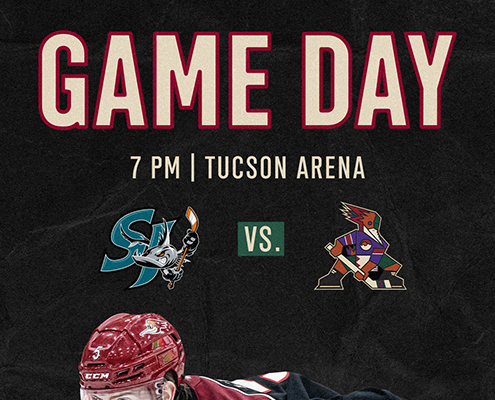 The Tucson Roadrunners will conclude their season series with the San Jose Barracuda Saturday night as they’ll meet for the sixth and final time this year, as well as the fourth time in 14 days. The contest also wraps up their current three-game set against the Barracuda, with each team currently sitting at one win apiece on the week. The Roadrunners will be looking for back-to-back wins after defeating San Jose 4-3 in a shootout Friday night, as they’ll celebrate Hockey is for Everyone Night at the Tucson Arena. The first 1,500 fans will receive a Kachina Poster featuring Roadrunners Mascot Dusty. Tucson can also secure their fourth consecutive Saturday night home win dating back to January 29.

Three Things
1) The Roadrunners have continued to play and win close matchups after Friday’s 4-3 shootout win. The game was the second of the last three contests to go to overtime for Tucson, and third time in the last four outings to be decided by one goal. Each of Tucson’s last nine home series have featured a one-goal game, with the Roadrunners boasting a 7-1-1-1 record in those matchups. After Friday’s shootout win, Tucson is now 3-2 in games that have gone past overtime on their home ice and 2-0 in shootouts at the Tucson Arena.

2) Leading the Roadrunners in scoring in Friday night’s 4-3 win was Captain Hudson Fasching. Fasching scored his ninth and tenth goals on the season in the first period to give Tucson a 2-1 advantage over San Jose. The 26-year-old became the sixth Roadrunners skater this season to record double-digit goals and assists, joining Matias Maccelli, Mike Carcone, Jan Jenik, Ben McCartney and Cameron Hebig. Fasching has helped Tucson set the tone early in games this season, as eight of his ten goals have been scored in the first period. His points per-game average this season is the best of his AHL career, and the Roadrunners Captain is two assists away from matching his career-high of 18.

3) Returning to the Roadrunners roster for Friday night’s win was forward Mike Carcone. The 25-year-old was back in Tucson after a game in the NHL with the Arizona Coyotes on Monday, March 14. Carcone played a big part in Tucson’s 4-3 shootout victory, as he scored a crucial goal at the midway point of the third period and buried the decisive goal in the shootout. His goal in the third period was his 24th of the year, setting a new Roadrunners franchise record for goals in a season. Carcone is on pace to become the first player in Tucson history to lead the team in goals for back-to-back season and will look to further extend his four-game point streak in Saturday’s matchup with San Jose. The second-year Roadrunner has not been held scoreless in consecutive games since December and has more games with a goal (14) than outings without a goal (12) since the start of 2022.

“I think he’s produced consistent offense all season long. He’s had the ability to score with [Matias Maccelli], without Maccelli, and that’s hard to do in this league. He’s doing it while he’s playing a good 200-foot game. The ability to get the record in terms of franchise goals, that’s an unbelievable achievement based on players that have been here in the past.”

Tucson Head Coach Jay Varady on the season-long performance of forward Mike Carcone. The 25-year-old set a new Roadrunners franchise record for goals in a season Friday night, as he lit the lamp for the 24th time this year.

Number to Know
24 – The number of combined power-plays over the first two matchups this week between the Roadrunners and Barracuda. Wednesday’s series opener saw Tucson and San Jose combine for a season-high 114 penalty minutes with another 52 minutes in the box added in Friday’s contest. The Roadrunners took eight trips to the man-advantage on Friday alone, with Hudson Fasching cashing in on Tucson’s fourth power-play of the night.

We’re Doing It Live
Tonight’s game will be broadcast on AHLtv, as well as on the radio on Fox Sports 1450AM or on the iHeartRadio app. Coverage begins at 6:45 p.m. MST with Roadrunners Warm-Up, as Jimmy Peebles gets you ready for the game before “Voice of the Roadrunners” Adrian Denny has the call at 7:00 p.m. live from the Tucson Arena.