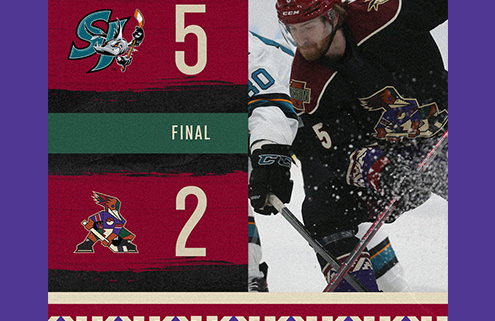 Tucson, Arizona – The Tucson Roadrunners took on the San Jose Barracuda for the final time in the regular season Saturday night at the Tucson Arena. The meeting was the rubber match of a three-game set with the Barracuda over four days in the Old Pueblo. San Jose came away with a 5-2 win in the series finale, with goals for Tucson scored by Cole Hults and Travis Barron. Ivan Prosvetov was in net for Tucson, as he recorded 28 saves. The Roadrunners and their fans celebrated Hockey Is For Everyone Night as part of the game, with the first 1,500 fans receiving a Kachina-themed poster featuring Roadrunners Mascot Dusty courtesy of Tucson International Airport.

Watch Roadrunners forward Travis Barron tip in a shot from defenseman Matt Foley to give Tucson their second goal of the game. The score marked Barron’s ninth goal of the season, bringing the 23-year-old up to 20 points in his first year as a Roadrunner. The goal also gave Foley his first-ever point streak in the AHL, as the rookie defender recorded an assist in back-to-back games with San Jose to close out the series.

POWER-PLAY PRODUCES – Tucson tallied a power-play goal in the second period of Saturday night’s matchup with the San Jose Barracuda, marking the fourth time in their last five outings that a different Roadrunner has scored while on the man-advantage. Four different Tucson skaters have accounted for the four power-play strikes dating back to Friday, March 11: Cameron Hebig, Travis Barron, Hudson Fasching, and Cole Hults.

The Roadrunners and their fans celebrated Hockey Is For Everyone Night at the Tucson Arena Saturday night, presented by O’Rielly Chevrolet. Fans and staff throughout the building wore special Rainbow Roadrunners shirts, as Tucson wrapped up the three-game series against the San Jose Barracuda.

“We fought our way back a couple times and got within striking distance, but we took too many penalties. We put ourselves in bad positions and [San Jose] capitalized.”

After a goal in the opening minute of each of the first two matchups with San Jose this week, it wasn’t until 6:18 into Saturday night that a goal was scored. The Barracuda struck first with the goal to take a 1-0 lead, then extended that advantage to 2-0 with 5:15 still to play in the opening frame. The pair of Barracuda goals represented the only scoring through the first 20 minutes, as Tucson entered the second period facing a two-goal deficit. The Roadrunners went on their first power-plays of the night midway through the second period with a five-on-three advantage over San Jose. Tucson used the opportunity to pull to within a goal of the Barracuda with a goal by Cole Hults. The score marked his fifth time lighting the lamp this season, extending his lead for goals among active Roadrunners defensemen. Tucson followed up the score by fending off back-to-back San Jose power-plays before the Barracuda got a goal back at even strength to push their lead out to 3-1. The score came with 3:36 left to play in the middle frame and marked the final goal of the period, as Tucson trailed by two at the start of the third period. Tucson opened the final frame of regulation with an even-strength score to bring the Roadrunners back to within a goal of San Jose. The goal was tipped in by Travis Barron from Matt Foley for Barron’s ninth tally of the season. Foley’s assist gave the rookie defenseman his first point streak of the season, as well as three points (3a) in four outings against the Barracuda since the start of March. San Jose once again answered back with a goal less than two minutes later to keep their lead at two, this time while on their fifth power-play of the night. The Barracuda netted another goal with 6:35 still to play in regulation to take their largest lead of the night at 5-2. That score wound up as the final from the Tucson Arena, as the Roadrunners and Barracuda met for the final time in the regular season.

The Roadrunners will head out on the road to finish the month of March, beginning with a midweek matchup against the San Diego Gulls on Wednesday, March 23. That game is scheduled for 7:00 p.m. MST, with coverage beginning at 6:45 p.m. MST on Fox Sports 1450AM with Roadrunners Warm-Up hosted by Jimmy Peebles. Then, “Voice of the Roadrunners” Adrian Denny will have all the action live from the Pechanga Arena.

Tucson Roadrunners Road Ahead: Rounding Out The Month On The Road
Scroll to top