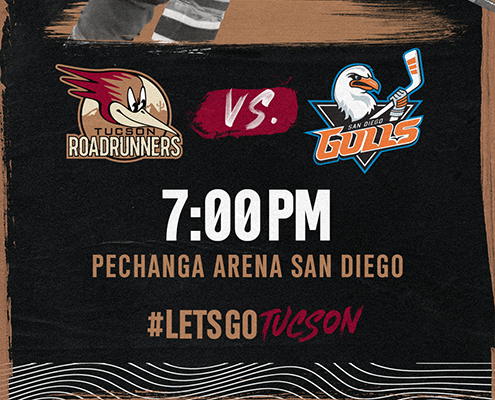 The Tucson Roadrunners head out on the road Wednesday night to face off with the San Diego Gulls for the fifth time this season. Four of Tucson’s 16 remaining games are against their I-8 Border Rivals, beginning with Wednesday’s matchup and ending with the final three games of the regular season. The Roadrunners will look to get one win closer to defending their I-8 Border Trophy for the fifth-straight year, as they currently hold a 2-2 record against the Gulls this season. Tucson is 6-3 in their last 9 Wednesday matchups against the Gulls, and 10-3 overall against San Diego in games taking place between Monday and Thursday.

Three Things
1) The Roadrunners and Gulls have produced high-scoring matchups over their first four meetings this season. Tucson and San Diego have combined for 33 goals across their four previous contests this season, as the Roadrunners have 3.75 goals per-game against San Diego. Tucson and San Diego most recently met at the Pechanga Arena for a pair of games February 4 and 5 with 17 total goals scored. Tucson took the series finale 5-4, fueled by a hat trick from Mike Carcone. Earlier in the season, the two teams combined for 16 goals across a pair of games October 29 and 30 at the Tucson Arena. The Roadrunners took the second game of that series as well, that time backed by a five-point performance and hat trick from Hudson Fasching.

2) Despite four previous meetings with San Diego this season, Tucson’s primary goaltender Ivan Prosvetov has only been in net for one of the four contests. Prosvetov leads the Roadrunners in minutes played this season with 1998:10, which currently ranks fifth across the American Hockey League. The 23-year-old has only been between the pipes for 6 of the last 20 meetings with San Diego since joining the Roadrunners in 2019, despite leading the team in minutes in all three seasons. His last road win against the Gulls came last season on May 1, 2021, as he stopped a career-high 47 shots in a dominant 9-2 victory.

3) Tucson is visiting the Gulls at the Pechanga Arena during a busy part of the schedule for San Diego. The midweek matchup marks the second of back-to-back contests for the Gulls, as they capped off a stretch of four meetings in seven days with the Henderson Silver Knights on Tuesday. The four-game set with the Silver Knights saw the Gulls travel from San Diego to Henderson and back, racking up both minutes and miles. The Roadrunners enter Wednesday night with three full days of rest since their last game on Saturday at the Tucson Arena, with only three games in the previous 10 days. After Wednesday’s game in San Diego, Tucson will travel to Las Vegas for a pair of weekend games with the Henderson Silver Knights Friday, March 25 and Saturday, March 26.

– Goaltender David Tendeck (.915 Save Percentage, 2.49 Goals Allowed Average (GAA) in three games with Tucson this season. All three appearances with the Roadrunners have been on the road.)

“This division is really tough, every team is a tough challenge and you have to be ready each night for a good hockey club.”

Roadrunners forward Travis Barron on the strength of Tucson’s divisional opponents, as the AHL Pacific Division possesses five of the top 11 overall team records across the league.

Number to Know
4.17 – The average number of goals scored per-game by the Roadrunners in their last six road meetings with the San Diego Gulls dating back to March 2021. Tucson has put up at least three goals in all but one of those contests and most recently posted five goals in a win over the Gulls on February 5 of this year. The Roadrunners set a franchise record for most goals in a game last season against San Diego when they defeated the Gulls by a score of 9-2.

We’re Doing It Live
Tonight’s game will be broadcast on AHLtv, as well as on the radio on Fox Sports 1450AM or on the iHeartRadio app. Coverage begins at 6:45 p.m. MST with Roadrunners Warm-Up, as Jimmy Peebles gets you ready for the game before “Voice of the Roadrunners” Adrian Denny has the call at 7:00 p.m. live from the Pechanga Arena.